The app Annus Fidei is free and includes Church documents including those of Vatican II, but despite the information in the app store it is Spanish only .

What hasn’t been reported is that there is also another app in the pipeline for a more progressive audience the “Spirit of Vatican II” app which includes these great features: 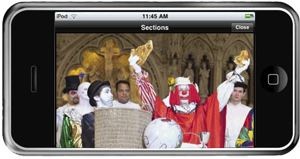 So what features do you think it should have?

The Pope who stole Christmas

What is the New Evangelization?

Father I suspect you are not drunk with...

App for finding fairy dust to smoke in the Vatican Two Peace Bong.

Tsk, tsk. Should be swipe-to-dissent.

The pinch-to-zoom gesture should be reserved for a feature that allows users to select specific parts of liturgical documents and make them bigger or smaller according to their importance to the community.

There are plenty of others out there already using the same functionality on the Bible, though, so there may be some patent issues.