I have seen some outcry over this on social media.

Personally, I like that Cardinal Schönborn is reaching out to the Nephilim. I mean if you’re a biblical giant where can you hang your sweater to drip-dry?

Although, I hold the line at Nephilim ugly Christmas sweater contests.

Also, I don’t know if the Nephilim are responsible for this.

“Some of his sculptures can also be seen in the church or in front of the cathedral, mainly in disfigured or deformed form, such as a boxing glove, deformed houses, a body without a head, hands and feet, and bags on legs. At the Singertor there is a large hot water bottle on its feet, called “Big Mother”.”

Plus in my odd imagination, I can imagine that the guy who threw Pachamama into the Tiber might be making a visit to Vienna. I can also imagine him singing Weezer’s “Undone – The Sweater Song” while grabbing a thread.

That message this year questions “peace on earth”, since Jesus represents migrant children being held at the southern border separated from their parents.

“We’re not trying to scandalize anyone,” said parishioner Pat Ferrone, a member of the Pax Christi committee which came up with the idea for the display. “We’re trying to reflect back a reality that has to be looked at.”

The nativity scene in Dedham has a baby Jesus in a cage, calling attention to immigration at the U.S.-Mexico border. (WBZ-TV)

But mixing politics with religion isn’t sitting well with some who believe the nativity scene has crossed a line. “This is where you come to pray not to be preached at what you should think about politics,” said Helen Watson who drove to church to see the display.

Fr. Josoma insists the scene is not a dig at Trump administration policies. Instead of political activism he calls it gospel activism. “We talk about Matthew 25 feeding the hungry and welcoming the stranger.” Source

I am outraged! Everybody knows for Catholic you don’t put out the Baby Jesus in a cage until Christmas Eve. Gee, what were they thinking?

Actually, the only Baby Jesus’ I worship are cage-free, free-range, and organic.

There’s Now A Religion Based On the Blockchain. Yes, Really..

Liston unveiled his blockchain religion, which he calls 0xΩ (“Zero ex omega”? … He distributed 40 hard copies of a document he calls 0xΩ’s “flame paper,” the closest thing the religion has to a “holy book,” that reportedly outlines how Liston wants 0xΩ to function.

“It’s a religious framework that could allow for belief sets to update much more quickly and also to democratize the relationship between membership and convergence on what everyone believes in this religion,”

The fundamental idea is that blockchain could eliminate the need for the faith to have a governing authority. In many of today’s major religions, the beliefs and decisions of the people at the top — the Pope, the Dalai Lama, the Chief Rabbi — trickle down to the rest of the believers. The average follower has very little influence on the religion’s core beliefs.

0xΩ could work differently, because users could have a say. Followers might decide they want to change parts of the blockchain religion’s texts (starting with the flame paper) or start using donations to support certain charitable causes. …

Because it is distributed and difficult to hack, blockchain may provide the perfect platform for followers to voice their opinions on these matters, or give their vote to another member to vote on their behalf.

And if followers can’t reach consensus on a topic, 0xΩ could “hard fork” into two separate religions.

A blockchain, is a continuously growing list of records, called blocks, which are linked and secured using cryptography. Each block typically contains a cryptographic hash of the previous block,[6] a timestamp, and transaction data.[7] By design, a blockchain is resistant to modification of the data. It is “an open, distributed ledger that can record transactions between two parties efficiently and in a verifiable and permanent way”. For use as a distributed ledger, a blockchain is typically managed by a peer-to-peer network collectively adhering to a protocol for inter-node communication and validating new blocks. Once recorded, the data in any given block cannot be altered retroactively without alteration of all subsequent blocks, which requires collusion of the network majority.

A blockchain is most known for providing the ledger for the cryptocurrency bitcoin.

Still this got me thinking about Catholic parallels. For Catholic we have sort of a “Upon this Rockchain”. That a combination of the Magisterium, Apostolic traditions, and scripture provide a secure way together of providing sort of a ledger of what the Church believes.

Without this private interpretation results in a “hardfork” into separate religions as the article mentions. The Ordinary and Extraordinary Magisterium provides a “christo-graphic hash” verifying the authenticity of her teachings. The best hash is one signed with what Vatican I called “divine and Catholic faith".

Yes I am stretching the comparison here – but just indulging my geekiness poorly.

Love this statue. It seems the only statues of Mary I ever see are the sorrowful ones. Certainly there is a place for this and to contemplate the sword that pierced her heart. Still I loved the imagery of the playful Mary in The Passion of the Christ and would like to see more such imagery.

An article about the Church of England using Alexa to spread “Christianity”.

Maureen at “Aliens in This World” post another of her interesting articles St. Leonides, the Father of Origen. Did not know his father was a martyr.

And in other saintly news. While I knew that there was an investigation into the life of G.K. Chesterton, apparently it could be moving forward. GK Chesterton’s sainthood cause may soon be opened.

I’ll leave you with a couple of my bad jokes.

I was generally positive about the history concerning Pope St. Pius V. until I read this article.

It might sound ridiculous, but jesters used to be so common that nearly every powerful and important person had one. And I mean it: pretty much everyone. Kings and princes? Of course. Bishops? Yes. Cardinals? Yup.

But did the pope have a jester? It might sound ridiculous, but yes, the pope had a jester.

The thing you need to know is that jesters weren’t necessarily clowns. They were responsible for entertainment of every sort in the Renaissance period. Just like artists of the time were expected to be masters of sculpture, painting, architecture and even music writing, jesters were expected to be master entertainers. This included but wasn’t limited to storytelling, athletics, acrobatics, singing and acting. And yes, they knew how to juggle, occasionally wore silly costumes, and told jokes. Their trade was expendable, but also respected. So when dignitaries and nobility visited Rome to see the Supreme Pontiff, a little bit of entertainment was expected.

Have to admit that being the Papal Jester would have been my dream job if it had not been eliminated. I can even do some of the things listed – juggling, singing, acting, wearing silly costumes, and of course telling jokes.

Bring back the Papal Jester in a return to tradition.

Smart Beads – Now do the Rosary

Taiwanese tech company Acer has made Buddhist prayer beads that can help keep track of recited mantras. The beads have a smart chip that tracks the number of times a mantra is repeated and displays the number on a smartphone app. (The chip senses how many times a user has rotated the beads through their hand. Each rotation marks one mantra.).

The beads also reportedly have the capacity for future features to be added, like electronic payments, or getting discounts from Buddhist shops and restaurants.

I could almost wish for a Rosary version of this.

Although I could also see it’s use for reciting the Jesus Prayer. The Pilgrim in the Russian Orthodox classic The Way of the Pilgrim could have made use of this as he was given more and more repetitions of the Jesus Prayer to recite.

Now the Buddhist prayer beads version is rather odd in that electronic payments will be latter enabled. What? Perhaps PrayPal. Or maybe to pay for Pray for View.

Now what options would a electonic Rosary have?

Another nun made strange, clacking noises in chapel. Therese did not say, but the good lady was probably either toying with her rosary or was afflicted by ill-fitting dentures.

The clacking sound really got to Therese. It ground into her brain. Terrible-tempered Therese was pouring sweat in frustration. She tried to shut her ears, but was unsuccessful. Then, as an example of her ‘little ways’, she made a concert out of the clacking and offered it as a prayer to Jesus. “I assure you,” she dryly remarked, “that was no prayer of Quiet.”

During flu season right after “The Rite of Peace” comes, for me, “The Anointing of Purell”.

“SECOND COMING INBOUND. SEEK IMMEDIATE REPENTANCE. THIS IS NOT A DRILL.” The Vatican quickly announced that this is a false alarm since they don’t know the day or the hour or are they given five minutes warning.

Going to the emoji confessional

written by Jeffrey Miller
Before confession 💩
After confession 😇
🤔 How do I condense my list of sins down to something manageable?
🤐 Good thing there is the seal of the confessional
😮 What I imagine the priests reaction is.
😴 His actual reaction.
😰 Me wondering what my penance is.
😁 Me receiving my penance.
😂 Absolution – thank you Jesus!
Inspired by this. 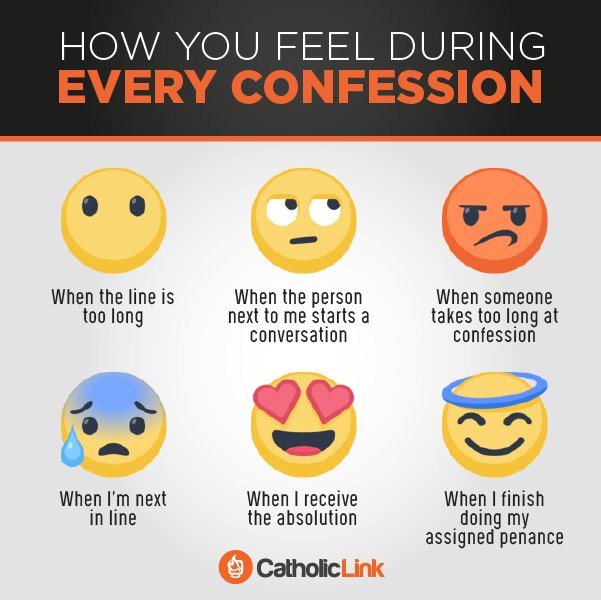 Group of Knights of Columbus split off

Earlier this month, the Knights of Columbus board of directors unanimously voted to adopt a new uniform for the Fourth Degree. The decision was made with the good of the entire Order in mind. While we understand that some members may prefer the old regalia, the supreme master and vice supreme masters urge all Fourth Degree members to put the good of the Order before any personal preference. 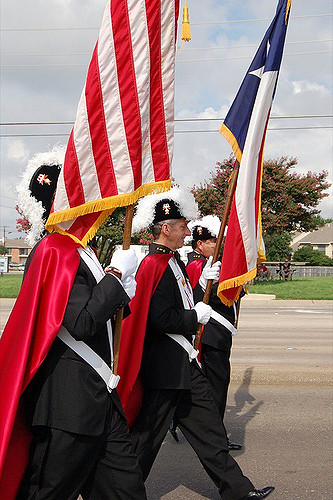 Is being replaced with a more modern version.

The move was in answer to comments received by prospective members put off by the historic regalia. While some see this as positive move, others are less pleased.

A new group calling themselves the “Pius Knights of Columbus” has split off ordaining there own board members in direct opposition to Supreme Knight Anderson and without receiving permission. These schismatic Knights consider the traditional regalia as “The Uniform for the Ages” which as been in use with some changes since 1900. They refer to the updated uniform pejoratively as the “Novus Uniformus” and don’t consider it valid regalia for events.

Members of the “Pius Knights of Columbus” are petitioning Pope Francis to issue a Motu Proprio allowing a stable group of Knights to wear the uniform beyond the June 30, 2018 cutoff date.