Home Humor Forcing my will on you to stop “bullying”
HumorPunditry

Forcing my will on you to stop “bullying”

Wow! How far has the world fallen? A group of parents in Missoula, Mont. are upset over the religious nature of Christmas songs performed at a local elementary school – alleging the songs about the Baby Jesus is unconstitutional and a “form of bullying.”

The parents, who declined to be identified, are threatening to sue the Missoula County Public School District unless songs like “Joy to the World” and “Good Christian Men Rejoice” are replaced with secular tunes. [Via Creative Minority Report]

I’m shocked, shocked I tell you. That there is a public school that was still singing actual Christmas carols is quite shocking. Especially how did “Good Christian Men” get past the inclusive language politically correct carols?

Although Christmas carols are quite dangerous and can have a delayed impact on the young mind. As a young atheist and throughout my life I have loved Christmas carols and specifically the traditional sacred carols. I had zero theological connection with them, but I knew their beauty musically and I reacted to that beauty. While I can enjoy the more seasonal Christmas songs that are more about climate and good feelings during this season (Christmasy songs), the traditional carols were always what I wanted to hear.

At one time you could turn on the radio and be certain to hear a good proportion of the sacred Christmas carols. As years have passed the stations that would play “Holiday” music were concentrating almost fully on the Christmasy songs. I remember once noting on a 24 hour Christmas music channel on a cable network that after a couples of days they played no traditional songs at all.

Wanting my traditional Christmas carol fix I had started to channel hop on the radio trying to find a station that played them. This led me to listening to Protestant radio and putting up with their between song messages. This in turn led me to the seeking phase of my conversion and devouring books at the library on the subject. The hit-and-run accident that had led me to question my atheist faith a couple of years priors had opened me up and of course God was providing me grace to see the world anew.

So atheist parents if you want your kids to grow up to be devout atheists please don’t let them become ritually unclean by listening to actual Christmas carols. Beauty is a devious trick of believers, sow watch out.

The above story though does remind me of a parody I did before: 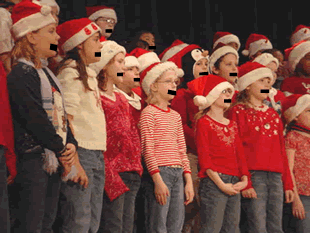 PORTLAND, OR (Roto Reuters) A new children’s choir groups is getting lots of attention and bookings during the winter season. The Silent Night Seasonal Semi-Singers sidestep the problems inherent in a multi-cultural society and what has been called the “Christmas wars.” Secularists are upset with the lyrics of explicitly Christian carols and Christians become upset when these carols are left out. To solve this problem Ms. Giesel of the the Glencoe school elemenatary choir decided instead of hymns to do hums. Students are gagged while performing to ensure no actual Christian carols are ever sung. The instrumental portions of traditional Christmas carols are slightly altered to ensure no one in the audience might attempt to sing along. Silent Night is sung just as intended – totally silent. To ensure fairness winter holiday songs are also hummed.

Parents at first were hesitant to endorse the idea until they found out how enthusiastic their kids were. Now even students with no musical talent can join the choir and hum along. The provided humnal makes it very easy for kids to learn songs since they do not have to memorize any lyrics. When the audience is invited to join in and hum along nobody ever feels bad or put down since they don’t know the words or only know the first refrain.

The idea is catching on in neighborhoods where kids bundle up and go around the neighborhood from door to door humming or what some have called humoling. People are thrilled to find hummers at their door humming along to slightly familiar tunes invoking the winter season. So if you see a group of humolers approaching your door this season then open your door to the joys of holiday humoling.

When conversions are a threat

Cooperation between atheists and Christians

Pelosi the staunch defender of the Catholic Faith

From pole to popes

Not about the cures in the first place

Well, at least you don’t have to listen to ‘walking in a winter wonderland’ in a country where Christmas is predicted to be 40c ( way over 100f. )