JERUSALEM 20 B.C. — Today a breakaway group ordained a member of the  Tribe of Benjamin at the 1st Community Temple. The Non-Aaronite Ordination Conference NAOC has lately been raising awareness concerning the disparity in the treatment of the twelve tribes of Israel.  The newly ordained priest wore the traditional vestments consisting of a breastplate, ephod, robe, tunic, cap, sash and in a odd break from tradition a purple stole. NAOC President Samuel bar Jonah told us “Restricting the priesthood to the Tribe of Levi is totally unfair to the other eleven tribes. Are the men of the tribe of Levi better than men of the tribe of Benjamin, Dan, Issachar, or any of the other fine tribes? How can we share equally in the Temple worship if we are also not allowed to offer sacrifices to the Lord? Besides I think there was a bit of nepotism involved in Moses appointing his brother Arron and establishing the Aaronic priesthood. The official church does not seem to recognize that all tribes are equal in dignity and justice demands equal treatment!”

Small groups of protests involving various tribes have broken out across the city demanding justice. 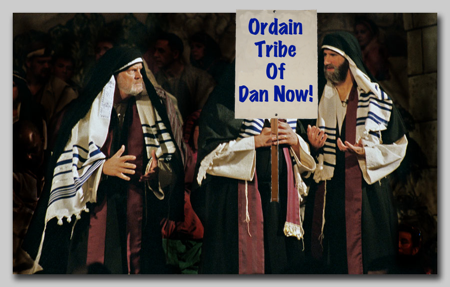 Protesters are upset  about the injustice and tribal discrimination.  One man who spoke anonymously for fear of Temple reprisals and being excluded from Temple sacrifice told us “The temple also uses an all-Levi priesthood as the norm when it proclaims that other tribes do not image the Aaronic priesthood and therefore only ordained men from the Tribe of Levi can adequately represent the sacrificial nature of the priesthood .  This is simply false considering that even before Aaron scripture recognized other priests like Melchizedek who was good enough for Abraham and should be good enough for us.”

One Temple priest how agreed to talk with us said “Being a priest isn’t all it is cracked up to be.  For one you don’t own your own property and are totally dependent on the tithe of others. Plus all the work in quality control makes it rather difficult.  I can tell you stories of animals that were brought to me supposedly ‘devoid of defect” and actually having a defect or two.  Plus grain sacrifices can get pretty old pretty fast.”

New Doctors of the Church

One Body, Many Blogs

Group of Knights of Columbus split off

Coming to a parish near you

Historic vote in The House of Commons

And don’t forget all of the horrible abuses of the Levitical Priesthood.

In fact they were people who murdered their fellow Hebrews for being Ecumenical in their worship of one of God’s many aspects, the Golden Calf (or as they called it, “The Bovine Light.”)

There is no reason why they should be priests, just because they have Levi genes!

This is really funny – Mother Marium of the Lamb of God is here in Lincoln, NE today and talked about her Jewish upbringing and her conversion. Yep. Right on.

It worked out great for Korah in the book of Numbers