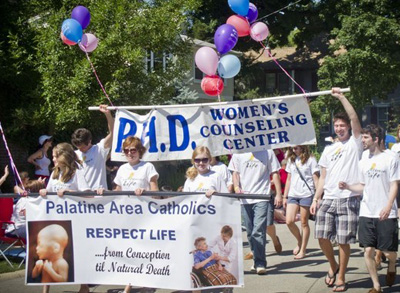 Spot the “offensive photo” in the picture above. Wow this is much harder than “Where’s Waldo.” Give up? Well it’s the ultrasound photo on the banner of course.

The Jaycees have thrown out the “Palantine Area Catholics Respect Life Group” because of the “offensive photo” on their banner and won’t allow them to march in this years 4th of July Parade.

“They decided that an unborn baby is too offensive,” said Martin Kelley, co-founder of Palatine Area Catholics Respect Life. “It’s an ultrasound photo. It’s not a picture of an aborted baby. [Source Warner Todd Huston]

Also of course the gay and lesbian group will be allowed to be part of the parade since everybody knows these groups show so much restraint.

Well maybe one day we can have an Independence Day for the Unborn when they are allowed to live.

But Gregorian Chant is just so hard

This book won't be going on my Amazon...

We invite you to leave or not come...

A review of aleteia

Charity is serving only one faith

Agree. And the unborn can hold up a banner that says “Disturbed by Truth”…

Well, the Magisterial objections to graphic abortion photos (evokes post-abortion trauma etc…) apply as much to pictures of the ultrasound photos as they do to the pictures of unborn babies.

What do you mean by “post-abortion trauma”? Isn’t abortion no different than drinking a glass of water? Haven’t we been told that abortions are actually a “happy event to be celebrated”? I am confused…

I don’ think forbidding them to march was right, but that doesn’t look like an ultrasound pictue to me — even a 4D ultrasound. It looks like either an aborted baby or one of those in-the-womb laproscopic photos (which I used to think were aborted babies). So if people THOUGHT is was an aborted baby, I can see them getting upset.

I’m pro-life and pro-choice. Because you can’t legislate morality and it isn’t loving to try. And my heart aches for the mothers and the murdered babies…but graphic and gruesome photos help how
?

SHAME ON YOU again Jeff! What are you trying to do? You have no right to defend groups who will not follow rules created by godly Christian people who know best when “IT” comes to pictures that evokes post-abortion trauma etc…)

You don’t have my support on this one cause before you know “IT” you’ll be against groups who allow dogs in church during “Holy Communion.” Don’t you know that today’s peter allows these kinds of changes to take place like the blessing of same-sex-marriages!

Get with the times Jeff cause even Jesus tried to correct his peter when He told a cell of his peter to “Get behind me, Satan! You are an obstacle to me.”

Do you honestly think that you’ll get much sympathy for this stance?

Wake UP before “IT” is too late for you Saint Jeff!

I hear ya! Forgive me if I detect a little sarcasm Victor!? 🙂

Those same people who think a picture of a fetus is offensive see no wrong in displaying nearly nude women on their websites. Go figure. 😛