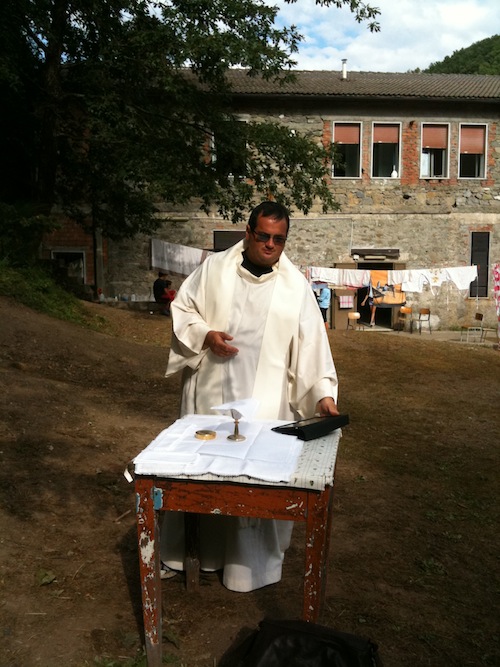 Yikes. The using of the iPad with a PDF version of the Lectionary is the least troublesome part of this. Now I can certainly understand valid instances where the local ordinary would approve a Mass held outside. But, come on – couldn’t he find a decent place inside to hold Mass? Plus the altar really makes me cringe. I guess you can use it for Mass and then mix paint on it afterwards.

Can. 932 §1. The eucharistic celebration is to be carried out in a sacred place unless in a particular case necessity requires otherwise; in such a case the celebration must be done in a decent place.”

We often hear about Catholics who want to have their wedding Mass held outside. The local bishop can give a dispensation for that, but I don’t know of such a case where this was done. But I have seen a lot of photo’s of priests conducting Mass outside in less than ideal circumstances – or maybe I just see the photos of the more shocking cases.

I once went to an outdoor wedding held in the Rose Gardens next to the Zoo in Portland, Ore. When the minister asked the “Do you take” question the Zoo train blew it’s whistle. It was pretty funny though.

I previously posted thoughts on the iPad at Mass here.

I’m Shocked I tell you

As a former camp director, I want to come to the defense a “little.”

We used to have Mass outside with both the boys and girls camp. There was nowhere inside that was SUITABLE. It was either a too hot rec hall, or a cafeteria. Neither really had enough room.

So we held it just outside of our chapel in a grove of trees.

That being said, we did have a better Altar, but oustide Masses at camp are better than the alternative… No Masses.

Could be worse. At least the priest has his vestments and they are having Mass, not a ‘celebration’ of the various sorts.

I’m with Joe on this one.

Re: the atmosphere–it wouldn’t be so bad except for the laundry in the background–and I think Jesus has seen worse.

OK, painting the table would have helped too. But we don’t know the context of this mass–if this is the only table they have, well then, go ahead.

At least the priest has his vestments

Has he? Looks to me like the man is saying mass in his underwear. I am not impressed.

OK, so we can afford Ray-Bans and a fancy iPad, but can’t find a decent table and cloth to use for altar?

True, we don’t know full context of the Mass ~ but to the casual observer of the photo, a clear misalignment of priorities appears present. Perhaps there is a back story where the priest actually uses this photo when he teaches how he had a break-through on his understanding of what is sacred.

As IC said, if that’s the only table, well…. Hard to believe it, though. Maybe the drying laundry was a better vista than the other three? If so — yikes! People often comment that “all that church stuff isn’t really necessary.” No, it isn’t necessary… but it sure helps!!!!!

1. The Place for the Celebration of Holy Mass
[108.] “The celebration of the Eucharist is to be carried out in a sacred place, unless in a particular case necessity requires otherwise. In this case the celebration must be in a decent place.”[197] The diocesan Bishop shall be the judge for his diocese concerning this necessity, on a case-by-case basis.
[109.] It is never lawful for a Priest to celebrate in a temple or sacred place of any non-Christian religion.

I wonder if he got the bishop’s permission.

With regard to vestments, Redemptionis Sacrmentum (2004) states:
[123.] “The vestment proper to the Priest celebrant at Mass, and in other sacred actions directly connected with Mass unless otherwise indicated, is the chasuble, worn over the alb and stole.”[213] Likewise the Priest, in putting on the chasuble according to the rubrics, is not to omit the stole. All Ordinaries should be vigilant in order that all usage to the contrary be eradicated.

He is NOT wearing the proper vestments. The main celebrant should always wear a chasuble with the stole UNDER the chasuble.

There are a couple of distinctions needing to be made here.

The reason Marriage is celebrated in the physical church building is wrapped up in history. For something like the first half of the Church’s existence (don’t remember the exact dates… seminary is slipping already) marriage was seen more as a private formal contract between two people, and was almost always celebrated in the home. It wasn’t until the Church wanted to emphasize the public nature of the Sacrament in the life of society and the Church at large that it mandated all weddings take place in a church or chapel. We hold on to this regulation today to emphasize that fact, in a time where most young people looking to marry dearly need the reminder.

Celebration of Mass, however, is a different thing altogether. I do not need a dispensation from my bishop, for example, to say Mass on my dad’s coffee table like I do to marry John and Sue in the park.

The major question to ask regarding Mass is always, “Was there an alternative?” If it’s my day off, for example, and the church is occupied during my time of availability, and I have no access to a private priest’s chapel, then the Church would prefer that I say my Mass on dad’s coffee table than no Mass at all.

Coming up real soon here, there will be a great Mass for the Catholic Boy Scouts at the National Jamboree in AP Hill, West Virginia. It was the best Mass of my youth growing up, even though I wasn’t a practicing Catholic. These things are perfectly acceptable because they beat the alternative of no Mass.

As per the iPad: if a priest can say a good Mass with it, without scrolling all over town, I say go for it. I said a Mass on my iPhone once when I forgot my Sacramentary, and it was extremely frustrating.

If you take a poll of most priests who do private Masses on vacations, days off, or on the road in general, I’d be willing to bet good money that they majority of guys will tell you they use something other than the lock-stock Sacramentary. The book doesn’t travel well, and is about two times the size of my travel Mass kit. Most will tell you they use a Magnificat.

What you use in these regards matters little, unless it impedes your praying it well.

I misspoke about one part of this: I do technically need a dispensation to say Mass outside a church, though I have never heard of a priest going through this process due to the spontaneous nature of most private Masses. Also, if I were to privately celebrate on vacation, I would have to notify the local ordinary. I’ve never heard of anyone doing that either and it’s never been an issue for me, but I can understand why it would be helpful in terms of making sure everything goes as it should.

Outdoor Masses and outdoor weddings are a whole different kettle of parish fish. Weddings are supposed to be in public and in a permanent church, preferably a parish church instead of a chapel, because that protects all parties. It’s a canon law thing more than a sacred thing (though it’s that too).

A simple Mass outside is no problem, because traditionally having a small altarstone (with relics inside in the old days, without relics most of the time these days) was enough to make a valid altar out of any surface. Thus you could say Mass for men at war, for travelers, on boats, and in persecuted countries. Campers generally fall under the category of “travelers”.

So yeah, I don’t have a problem with Father saying Mass on a jeep hood or a table or a Mass Rock. I have problems with Father looking like something the cat dragged in (unless he had a good reason), and with nobody doing anything to disguise the horrible condition of the table legs.

Mass being said on a stack of food boxes: http://www.flickr.com/photos/soldiersmediacenter/4398466984/

My gosh, we are all so eager to judge …

Allow me to be less snarky.

It is certainly appropriate for a discussion of the iPad and it’s role in the Mass.

However, IMHO it is **not** appropriate to mock or be specifically critical of a priest, particularly a priest saying mass. It is far too easy to cross the line to disrespect; that has already happened on this thread.

I don’t have a problem with this mass; I remember mass at camp was outside and up on a mountain. Pews had been crafted out of stone and an altar made of stone for just this purpose at the camp because the founders were devout Catholics and the nearest church –this was the hill country of Texas, was 30 miles away.

Judging only from the background, these were faithful but simple people and this may have been the best table and mass on an old table is better than no mass.