Various readers have sent me links to news stories bout the Women’s Ordination Movement and a group of nuns who have been protesting the conclave in Chicago.

Here is a video news report covering the protest and the release of what they said was pink smoke on protest. The event was called “Open the Conclave with Pink Smoke.” You can see the joy of the women, nuns, and a reporter from the National Catholic Reporter at this event. That is just as long as your definition of joy includes the ability to curdle milk at 100 paces. 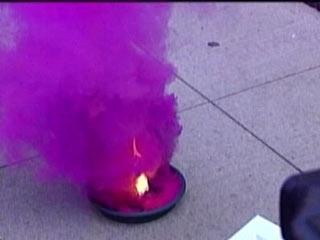 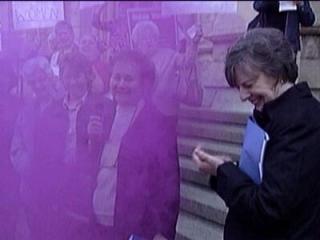 It is not surprising hat they are confused on this issue since they can’t even get pink smoke the right color. Less you think that maybe these are just some Catholics who fully believe in the Church, but just think it is wrong about women’s ordination. They also support programs to eliminate "heterosexism" (read gay rights) and they are of course also aligned with abortion supporters such as Kissling’s CFFC.

Now I do wonder why women might aspire to be priests and one day the papacy? If you can be disobedient to the pope you can’t really see the papacy as being all that important. If they can be disobedient then how could they expect people to be obedient to them at some future date. I remember hearing a story by Fr.Regis Scanlon where he told of an instance where his superior said it was alright for him to dissent from the pope. When the superior later told him to do something he said "I dissent." The superior was shocked and told him you can’t do that. To which he replied "I you can dissent from the pope, I can dissent from you."

Now there is an area that aspiring women priests could move into that as of yet does not seem to be occupied. Where are the women anti-popes. There are plenty of colorful and wacky male anti-popes. I mean how can we take women’s ordination seriously if they can’t even put forward a good anti-pope?

Update: There are some good comments made on this post, but the following one really cracked me up.

Last blog entry before the Rapture – Not

The Importance of Stuff

Catholic buzzwords and phrases I would ban.

I wouldn’t be surprised if that candle was being used in some witchcraftery… wait, you already mentioned the Women’s Ordination Movement, right? There we go…

And here I was waiting for them to dance in tights…

Obviously to exclude women from the priesthood in a universal church is to undermine the validity of that church. Here in the US I see my church crumbling and falling into obscurity. JP2 was out of touch on this issue and now we pay the price.

Once again I notice not a single young woman in these pictures. I assume they must have a couple of young supporters (just giving them the benefit of the doubt).

Young women have grown up with the folly of secular feminism and it stinks!

Thank you JPII for Mulieres Dignitatem where you honored our femininty!

“now we pay the price”
With having to watch women protesting with purple smoke? 🙂 (By the way, isn’t purple the color of mourning in the liturgy?)

There was an extremely dumb article in the British ‘Catholic’ magazine The Tablet lately, where the lady who wrote it argued that women should not aspire for the priesthood because that would be just another form of clericalism – and we have to get over that, understand? Hilarious! 🙂

I am female myself and I still oppose women’s ordination (something that will never happen, thankfully – in that case, they could also introduce coffee and cake instead of bread and wine at the Eucharist, because it’s all about the ‘material’ of the sacrament, after all). But maybe some people don’t get this and think women who adhere to the Magisterium of the Church are in some ways masochistic (the ‘happiness in slavery’ argument, (c) Monique Wittig). As if I as a laywoman could not have every opportunity to live a rich and full spiritual and apostolic life as a Christian! But the aim of these people is of course not exactly a rich spiritual life…

I would also be curious what happened if women’s ordination was granted but celibacy was retained at the same time. I wonder how many of these of these women would renounce becoming ‘priestesses’ in this case… 🙂

I think you’re right Susan. I often notice that those people who talk the most about ‘the spirit of Vatican II’ (not the real one, but the one that suits their minds) and always protest against the same old stuff (celibacy, male clergy, prohibition of contraception and abortion… yawn…) are all in their 50s and 60s (some maybe in their late 40s). They are those who experienced Vatican II in their youth (some even as children) and who still think – in the spirit of 1968 – that freedom means not having any rules.

I am quite happy and confident that people from my generation (I’m 26) are often much more orthodox than their forebears. The same is true for converts and reverts (of whatever age) by the way.

There is a moving German blog about this by a man who had been a ‘progressive’ cafeteria Catholic for several years and came back to the Magisterium a relatively short time ago. Quite interesting (for those who can read German)…

Women who push for women’s ordination see the priesthood as nothing more or less than POWER in the church. They don’t have a clue. The priesthood is nothing about power and all about service and obedience.

I’m tired of hearing the news stories yap on and on showing Sr. Joan Chittister complain about how the Vatican does not listen to concerns and closes these topics (womyn’s ordination, contraception, abortion) without proper dialogue. PLEASE – how much discussion is needed. We’ve had decades and decades of discussions, apostolic letters, clarifications etc. Unfortunately for these people, it’s never been the answer they wanted. The answer cannot change. All the discussion in the world will not change that.

Now for those who genuinely believe they are being discriminated against and denied rights in the Church. You have 2 choices. Either take up your cross, as Jesus suggests, or find a church that meets your own spiritual/doctrinal needs. Of course you can stay in the Church – all are welcome. However, you just don’t seem all that happy or fulfilled with that option.

The TABLET writer does not sound as “dumb” (and what is wrong with the English word “stupid”?) as people who rant “TheChurch is nothing but an oppressive structure whose sole purpose is exerting control over Peope… and what’s more, They won’t let women be part of it!”

The hierarchical structure of the Church Universal is inherently oppressive and must be overthrown if we are to attain our sexless-yet-gay Revolutionary Utopia (of a neo-neo-neo-Marxist bent, of course, unless they decide to throw some more “neo”s on there because Marxism keeps failing even on its own theoretical grounds).

But, just in case that whole “oppressive power structure that must be overthrown” game is sexy, women should be given a turn. Fair is fair, after all. Even if the game is inherently evil and corrupt and devilish, everyone should get a turn at it.

WE ARE CHURCH…and don’t you forget it 😉

All these two dozen women, from all around the country, succeeded in doing was make it impossible for me to park and pick up my pre-schooler, from the school at Holy Name.

To be fair, the smoke was in fact hot pink when I saw it on TV. Some color correction might be in order.

Really, I think they’re impostors. If they were serious, they would be *Womyn*Church Convergence, demanding *wimmin’s* ordination, a more *Wymyn*-centered Church, etc. Hmph.

Now, Paul, don’t be so desponding. The only part of the Church that’s crumbling in the US is the superannuated hippie-lesbian nuns-VOTF part. The traditional, habit-wearing orders are bursting at the seams and the orthodox seminaries are filling up fast, and a new faithful Catholic college seems to open up every six months or so. The Church is coming back like gangbusters in the United States. I knew you’d be pleased.