Home Humor To Bear witness to the light
Humor

To Bear witness to the light

Many blogs (for example Cnytr) have been pointing to the Pope Benedict XVI Bear. This is fairly appropriate since the Pope has a bear on his Coat of Arms. Now some people are against the Pope having a bear on his arms, but I totally support his right to bear arms.

But we must not forget his predecessor Pope John Paul II the Great Bear. 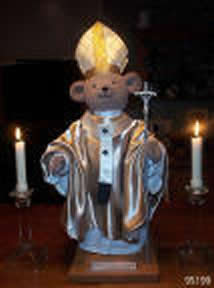 When the Pope calls

The Pope and Books

We don't need no stinkin' bioethics

Oh dear God, this thing is so going to make an appearance in my annoying co-workers cubicle sometime very, very soon. I just know it.

I object! This one does not have the pack.

I’ve got a Thomas Aquinas bear, complete with Dominican habit and rosary.

Cheese and crackers. Do we have to have a toy for every thing that happens to someone in this world? Love the Pope, and will have a nice picture of him soon I’m sure. But a stuffed Pope Bear? How about I take a stuffed bear that I already have and stuff it in a back pack? I’m sure there are plenty of people who will fall all over themselves to by this little cutie…what ever…..