Considering that Pentecost is often mentioned as the birthday of the Church it is not surprising to hear a homily referencing the age of the Church. Today I heard the same and like I hear all to often it involves bad Pentecost math in that the Church is referred to as being 2,000 plus years old.

Now I can understand a bit of shorthand in referring to the Church as being 2,000 years old, but not 2,000 plus. The error seems to count the birth of the Church from the birth of Jesus and not Pentecost after his death. While there is some lack of precision on the year Jesus was born (theories ranging from roughly 1–7 BC) any such recalculation still does not make the Church 2000 plus years old in the year 2013. Now this is no big deal, just one of those little things that annoy me.

Still I wonder if in the years ahead if the Church will try to set some date as a 2,000 year anniversary of the Church? Jimmy Akin had an interesting piece this year exploring if we could know when Jesus died. He sets it with some precision as 3:00 p.m on Friday, April 3, A.D. 33. So in 20 years we really could be saying the Church was 2,000 years old.

The other bit of bad statistical math involved in the homily was the priest saying there were 2 Billion Catholics. The actual figure is somewhat over 1.2 Billion.

Since the priest wasn’t interested in precision of numbers I put in a donation envelope that said $20 on the outside, but contained a check for $5 inside. Well not really.

Speaking of math, here is something from post from 2006 The Mathsiah. 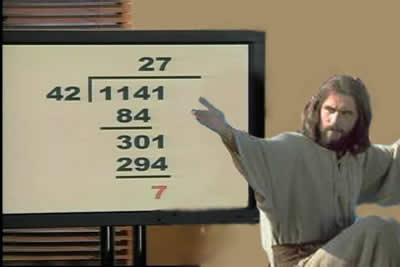 “Do you think that I have come to give peace on earth? No, I tell you, but rather division;”

“Be fruitful and multiply”

A study in contrasts

What problem are they trying to solve?

And when the sun was up they were scorched: and because they had not square root, they withered away.

Don’t forget at the end of St. Matthew’s gospel, Jesus told them to “go forth and make MATHETAI of all nations.” Oh yes, for REAL (no pun intended). In Mt 28:19 (see http://www.newadvent.org/bible/mat028.htm) the Greek word mathetai is translated discipuli in Latin (that website gives a synonymous form) which is English for STUDENTS. That’s really what it means to be a disciple: we are to STUDY our Lord, which is necessary if we are to imitate Him.

And what else would you expect from such a the symbol as the Cross? Remember, the square of all real numbers is POSITIVE.

I humbly submit to you that 2000+ years is quite accurate; please see CCC 759-760 from which I will paraphrase:

“…in keeping with the Father’s plan [the Church] is already present in figure at the beginning of the world…” (759) and “…Christians of the first century said, ‘The world was created for the sake of the Church'”.

If you want to really blow your mind, roll back to about 748 and get the context…good stuff man!

Not to go off on a tangent, or be mean, but your wit is integral to your writing. It really differentiates your blog. You may have reached your limit on this one.

(((You may have reached your limit on this one.)))

Mike if you’re right, tell me how this might affect cat lick min U>S three, “I” mean, Minis trees., no, no “I” mean Catholic Ministries NOW and…..

End YA say sinner vic for all of U>S (usual sinners)?