I am of the personality that once I find a parish I like I would prefer to make that the only parish I go to. My wife though is of the personality where she likes variety and to alternate among a range of parishes. The positive side of this is that I do see a vast range of how the liturgy is practiced within my diocese. This also means there are about four parishes where I can go to and have zero complaints and several others where my complaints are mainly directed towards the hymns and the folk guitar accompaniment. As a Catholic blogger it also provides me fodder and the ability to commiserate with others regarding the liturgy.

Thus I had two very different experiences on the last Sunday of Advent and Midnight Mass.

To start with the good I was very pleasantly surprised by Midnight Mass at a parish I had not gone to Mass before. I knew they had Life Teen Masses so I was certainly on the skeptical side. This was also the parish that the current Bishop of Birmingham was the pastor of. One of the things I love about Midnight Mass is to arrive early to be able to sing along to and to listen to Christmas Carols. Christmas is one of those few days when you can be pretty much assured of not getting the common Haugen/Daas/Schutte dreck. I was very glad to find a well-trained choir with accompaniment by violin, some brass, and organ. The pre-Mass carols were also an interesting selection including the standards along with some interesting choices such as the Coventry Carol about the slaughter of the innocents – very fitting this year. I was a bit tentative when I saw a bunch of hand bells positioned for use. Again I was surprised when they were put to use by a dozen women quite capably with both a carol done with just the hand bells and other types of bells and with some of the subsequent carols. Really quite beautiful and fitting for a Christmas Mass.

I was also quite delighted with the liturgy itself as much of it was chanted and there was a quite thoughtful homily delivered by the pastor a Vietnamese priest. I was also in for a nice surprise during the “Prayers of the Faithful” where there was intercession for the souls in Purgatory. Now maybe I had heard this done before occasionally and forgot, but really when I heard this I found this so fitting and really something that should predominate.

For a more modern church there were lots of blank walls, but they had a large crucifix in the center and I can forgive much when this is so. That and some good sized statues kept it from being as barren as many modern churches. Plus the Stations of the Cross were quite nice and ones I would not mind meditating before. Usually I find abstract Stations of the Cross where I have to squint to figure out what I am looking at.

The parish I went to on the last Sunday of Advent was another story. It is bad enough to get the folk guitar treatment, but when it is not even good folk guitar it is even worse. Typical Gather hymnal selection with the exception of “O Come Emmanuel.” Now I wouldn’t even mention this since this type of mediocrity is rather common. What punctuated it for me was “Liturgical Gestures” at least that is what they called it. What it really is is a copying of hand motions as practiced by some Protestant churches. They directed the laity to do certain motions with their arms during the “hymn”. Funny how actual liturgical gestures such as bowing during the Creed are never emphasized, but hymn dance moves make the cut.

I try to assign positive motives to people, but the road to liturgical hell is paved with good intentions and hand motions. “Well we have the awesome mystery of the Eucharist, but what can we do to spice it up? Of course hand motions.” The type of thought process that leads to these liturgical experiments betray a certain Protestant mindset totally set apart from the example the Holy Father is giving and and the “reform of the reform” is nowhere to be seen. What concerns me is that this kind of crap is probably not going to be something exceptional in one parish, but is the type of thing to spread to other like-minded parishes. I’ve made peace sort of with folk Masses, but please don’t torment me with “liturgical gestures”, as the Curt Jester I might have a curt gesture for this in response.

Otherwise this will be the next step: 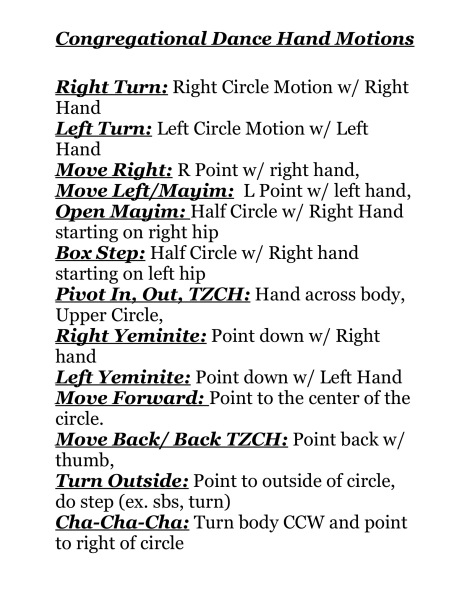 The above is from a helpful Protestant dance ministry that seems awfully close to a parody to me, but if you want to learn messianic dance steps here you go.

Now whenever someone objects to any forms of liturgical dance or other movements some will refer to King David dancing before the Arc of the Convenant. Well when they decide to dance naked like King David I might give more credence to the argument. Though they also forget the part where he had scandalized others and the fact that this was a non-liturgical act outside of the Temple.

Now this is a parish church that has speakers blazoned everywhere in all directions. So that means of course you could not hear the homily or the readings. In contrast the other parish with no speakers in sight, I heard every word annunciated quite well. Now if you are going to use microphones then it just might be a good idea to do some sound testing and to make allowances for the speaking style of different priests. The use of microphones can make people assume that others can hear them. As a child and through my teen years I was trained in the theater to be able to project my voice in an outside amphitheater or a typical auditorium. Yes that does make me a loud mouth, but you knew that already. Maybe the priest’s homily was a good one, but I have really no idea since in 15 minutes I heard words bubble up from time to time. I could have sworn a couple of times I heard “sodomite marriage”, but surely that must have been my imagination. Although I am fairly certain I also heard references to contraception and abortion. If so I would have loved to hear the whole homily from a foreign priest that had not yet had his Political Correctness injection.

On the plus side of things as I had mentioned before from my own Mass-going experience that actual liturgical abuses are becoming much less common and that mostly the problem area now is with the hymns. As most people have assigned this as mostly a subjective area, this area will likely be the last corrected.

Weird to see USCCB headlines about an “upset”

Priest sues for right to say Mass at...

No Gloating' Rule in Effect at White House

“Religious liberty does not depend on the benevolence...

What were the martyrs thinking?

They still don't get it

Well hello there! I was brought here by my website notifying me my material was being used. By all means feel free!

Your writing is, however, a little over my head and difficult for me to understand. Are you putting hand motions and dance into your category of bad experiences or good? Just curious.

Within the Catholic perspective where the Eucharist is the greatest mystery, liturgical dance leaves me cold and it is something that is proscribed within the Catholic Church and specifically the Latin Rite. Outside of the liturgy I have less problems.

when (liturgical dancers) decide to dance naked like King David

Clearly, you haven’t seen enough liturgical dancers. Some of the outfits leave little to the imagination.

My parents lined in IronDale add-on decade ago. I was visiting one Christmas and we drove around the freeway to the modern church. I was worried when I saw the brass instruments, I’ve been in churches with the load, off key horn, eek. I was filled to be treated to one of the most beautiful Christmas masses I’ve been to.

Now the charismatic mass I went to recently (here in Northern VA) what’s with the pennants they were waving? Egads.

Merry Christmas to all your readers, friends and their families Jeff and hopefully we’ll all continue to dance although me, myself and i during the holi days, I mean holidays have noticed that we just don’t dance as fast as all of U>S (usual sinners) use to dance.

I hear ya sinner vic! “I’M” sure that Victor would want us gods to pass “IT” on to all Christians of The “Hint Her NET” and to also wish all a Happy NEW Year! Right?

So true sinner vic and while we’re at “IT”, please tell all humans that “IT” doesn’t matter if the flesh cells can no longer dance very fast as long as “IT” is a dance that comes from the heart of heart, in other words, we need to accept GOD (Good Old Dad) and try to dance with a sincere heart and if we fall, we simply try to get back UP, if ya know what “I” mean? 🙂

Within the Catholic perspective where the Eucharist is the greatest mystery, liturgical dance leaves me cold and it is something that is proscribed within the Catholic Church and specifically the Latin Rite. Outside of the liturgy I have less problems.

I should point that it is severely limited in non-Latin rites as well. Most people have in mind the Ethiopians, but to the best of my knowledge, it is limited to the processional and is a sort of a low-key shuffle step into the sanctuary. Once the liturgy starts, it’s all business in a manner of speaking. It has no resemblance to the scantily-clad geriatric prancing about the sanctuary like some kind of wood fairy that we see in American parishes that have taken leave of their senses.

The main problem can not be laid entirely at the feet of liturgical dancing; it is rather a symptom of a larger loss of the sense of sacred space.