Kota Kinabalu: The Catholic Church in Sabah expressed regret over the actions of one so-called Ustaz Tajuddin Othman Abdullah, who claims in an Internet posting to be a former Catholic priest by the name of Thomas Laiden serving at one St Mary’s Church, in 1988.

"There is no such priest by the name of Thomas Laiden in the Catholic Church in Sabah.

"Whoever the individual is, his attacking the Church portrays a total ignorance and misinterpretation of Catholic teachings," he said in a statement here.

Bishop Lee said the Church deplored the underhand tactics used by the "ustaz" as "his action would definitely not contribute to the harmonious setting of a multi-racial and multi-religious nation like ours."

The so-called Ustaz’s attacks were contained in an article written in Bahasa Melayu. It also contained a testimony from him on why he converted to Islam.

Well this only adds to all of the other fake conversion stories of people claming to be Catholic priests who converted to another religion. I wonder what an Islamic version of a Chick Tract would look like? 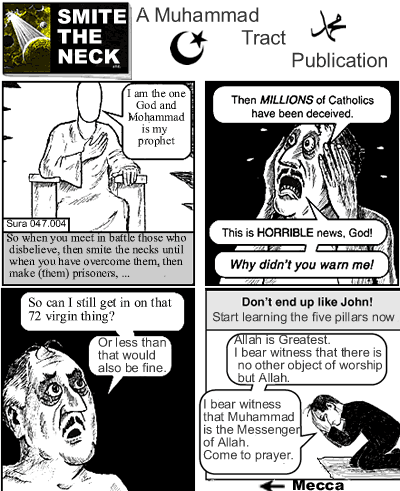 Apps to find where to go to Confession

Church for our time

Attacking the Servers for the Servant of the...

Muslim Chick tract is hilarious! However… watch out that guy is notorious for bringing law suits againt any who satarize his work!

That said way to go, stick it to the man! There is a local Baptist church that hands those anti-Catholic tracts out to students here, its amazing that some ppl take them seriously.

That’s really well done! Is there more to come?!

I still cant believe that anyone takes that guy seriously….but ya, good track *thumbs up*