Attack of the Killer Roebots

The new Battlestar Gallatica is much improved over the original series which was pretty lame for the most part and mainly an attempt to capitalize on the Star Wars phenomenon. In the new series the Cylons besides being the clunky mechanical shapes with the sequential head lights come in a much more modernized fighting robots which have created new Cylons that appear to be one hundred percent human. Now it strains credulity that these human form robots appear so human that even advanced medical tests would not show that they were not human. That these Cylons which were originally created by humans now are bent on wiping all humans out.

Though maybe this plot isn’t that far fetched after all. What if there was a group of human-form robots intent on wiping out the human race? I started thinking about what steps these theoretical robots would take to this end. They might look at the world and think that they could use the resources much better and in fact use them to be able to create more of their kind. They would work behind the scenes since they are not yet in sufficient numbers to take over the world by force. What real organization that exists might fit this criterion and to be able to move openly to for this aims? Was their a world government that they might manipulate or an organization like the United Nations? I soon ruled the U.N. out since an intelligent being would quickly see that though the U.N. might be useful towards their ends it is too much a paper tiger for world domination. Besides what intelligent creature would gravitate towards the U.N.? Then it dawned on me exactly what organizations have offices throughout the world and has a murderous appetite towards a growing human populace.

Doing some in depth research and following some clues I found on their server I soon found references to some scientific projects that didn’t fit in with their normal endeavors. The project files appeared to have been erased, but not up to DOD standards since I soon recreated the files in these directories. What I found startled me. The project TERMINAL REDUCTION seems to have been started in the year 1973 right after the passage of Supreme Court decision Roe v. Wade. The secret purpose of this project was to create mechanical creatures that would guard this Supreme Court decision from all comers and to prevent anything from limiting this decision in any way. These mechanical people were name ROEBOTS imprinted with the mission to protect Roe v. Wade. Looking though the project folder I found an earlier Kate Michelman prototype.

Yes I am talking about Planned Parenthood in which Kate Michelman had served as executive director of in Harrisburg, Pennsylvania. It makes so much sense now that I have seen the proof. Who else could be so murderous towards humans and not care about side-effects of say for instance the birth control pill. Could a human talk about choice and at the same time not speak out against forced abortions in China? Could a human being consistently have no problems with hiding cases of incest or the sexual use of minors by adults? Could a human being talk about choice and then campaign against a law that makes killing a women’s child in the womb against her will illegal. It is easy to see now in hindsight that the reason they could be so inhuman is the fact that they are in fact inhuman. Now if the project had ended with the Kate Michelman prototype we would not have been duped. Unfortunately this dastardly researched moved ahead. 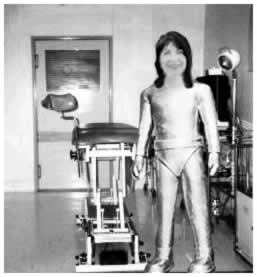 This more human-form version of Roebot Gloria Feldt proves that they progressed past the earlier models toward what we now have today. Could it be that Kate Michelman has finally stepped down from NARAL because she was in need of a replacement energy source? Luckily for us the scientists behind this project did not find solutions for every problem they encountered. While these Roebots can appear in public and socially converse with other people without being detected, there are some flaws. For example the logic circuits are defective and are not able to converse rationally on topics like abortion. Unfortunately for us this lack of consistent logic is not detected by most humans. Backup circuitry tries to overcome this logic problem by relying on words like choice, women’s reproductive rights, fetus, etc to explain these positions. Move-the-debate circuitry automatically bypasses any logical attack through the use of emotional terms or to broad philosophical ideas like human choice without ever spelling out what the choice entails. This all explains why Planned Parenthood is not only behind providing human birth control and abortions, but are also approving of euthanasia and any program that will sexually corrupt children to adults. If you were a killer Roebot wouldn’t you also tell puny humans to use condoms to prevent AIDS knowing that more humans will die of AIDS as a result? Only a truly immoral killer Roebot could have conceived of sites like Teen Wire that allows six years olds to learn about outercouse and masturbation. They know the way to destroy the human race is through the family and that forming human into habits of sexual license is a sure means to this endeavor.

These Roebots are equipped with a Sophistponic brain which is guided by a set of rules.

From these laws you can infer the overriding or the the Zeroth Law.

0. A Roebot may not injure Roe v. Wade, or, through inaction, allow Roe v. Wade to come to harm.

All of this is scary enough considering the power that they weld and the alliances they have made with human dupes. Yet they don’t have true power over us yet. Or do they? I found references to their later project with a more advanced model. This model appears to both advocate for and against abortion. That there research showed that they needed to placate pro-life humans and to lull them to sleep while they come in for the kill. I hope this new tactic won’t be effective, yet this last photo I found might give you some pause.

Dynamite of the Church

(BTW, it’s ‘this criterion’ or ‘these criteria’)