"In I attended the opening of a Chick-fil-A this fall in Evansville, Indiana as part of our Customers First package on exemplary service, I couldn’t help but notice how much Christianity is a part of the culture. More than once during the all-night event, Chick-fil-A president and chief operating officer Dan Cathy led employees and customers in prayer, reminding everyone that the company’s mission is not merely to serve a lot of chicken, but ‘to glorify God.’

"The chain, which is closed on Sundays, as a day of worship, has a strong Christian following. In Evansville, a group of teens held an impromptu Bible-study meeting in the parking lot following a game of touch football…" [Source] [Via Relapsed Catholic]

Chick-fil-A’s CEO is S. Truett Cathy. With a last name like that it reminds me of Johnny Cash’s song "Boy name Sue."

As a CEO, Mr. Cathy views his leadership role within the Chick-fil-A family as one in which he strives to demonstrate good leadership. He is not afraid to ask hard questions, re-evaluate situations that have not gone as planned, and asking for his staff’s input. Personally, Mr. Cathy says he does not consider himself religious. "We must continue growing in our spiritual life. It is a daily walk; always learning; always seeking more of God’s instructions."

And here is their corporate statement of purpose:

"to glorify God by being a faithful steward of all that is entrusted to us and to have a positive influence on all who come in contact with Chick-fil-A."

I am certainly glad this Christian man started this franchise instead of some others.

What if the notorious anti-Catholic Jack Chick had started a fast food chain? Can you imagine a Jack Chick-fil-A? No Shoes, No Shirt, No Papists – No Service. Which each unhappy meal you would get a Chick Tract to color. Maybe also included would be a Whore of Babylon Pope Action Figure. Above the french fry fryers would be a sign – this is what happens to Catholics. A fish sandwich would be available everyday except Fridays in Lent. You can’t order a sandwich with the works since his theology denies that you can get a sandwich through works. You must have faith and a couple of bucks. There would also be the doctrine of Sola Menu – only what is on the menu can be ordered. The menu is sufficient to order by and no menu items that were invented at the time of Constantine are available. 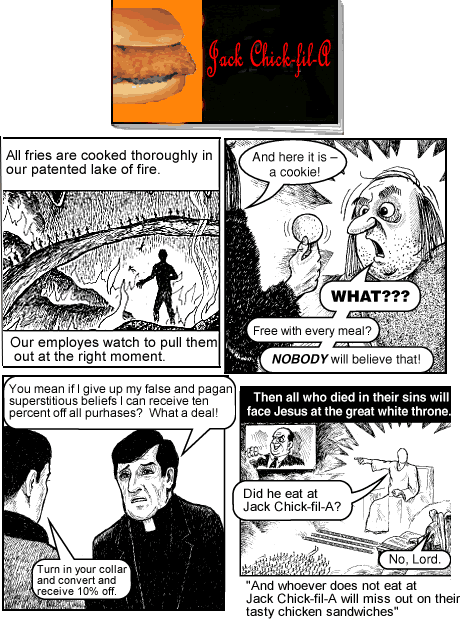 I don't think the G in this case stands for God

Worked at the on campus CFA for 2 years in college and I STILL think the world of it.

I’ve been accused of being thick before, so it may just be me – but I don’t get the last paragraph of this post. It seems to be a jab at Chick-Fil-A for somehow espousing radical Protestantism, which doesn’t seem like the right interpretation, but I can’t come up with another.

The last paragraph is in reference to Jack Chick the notorious anti-Catholic.

One of your best posts ever! Keep up the great work!

I used to get the Chick tracts when I was in college. I had a pretty good collection going, but I never got any of the anti-Catholic ones. I was disappointed. But I guess the guys handing them out didn’t see the Catholics as that big of a threat in North Carolina.

Why is God bald in those Jack Chick comics?

You are truly the funniest man on the internet!

Just to reassure folks: Chick-Fil-A, unlike Jack Chick, is not anti-Catholic. Back in Manassas, the local Chick-Fil-A had a tie-in with the militantly Catholic Seton School, with some students working as Chick-Fil-A delivery guys, and all students and teachers getting a discount.

That was da bomb!

I don’t understand why jack chick has his head up his. . . I mean, isn’t there a bible quote about judgement, you know, judge not lest ye be judged, by whatever measure you judge you shall be judged the same way. (not an exact quote, but close to it.)

Anyway, keep it up. In the meantime, I think I’ll stop at chick fill a for two chicken biscuits and a cup of coffee for breakfast tomorrwo.