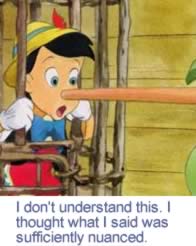 I have been following the Christmas in Cambodia statement by John Kerry pretty close and I want to know what the big deal is? Other than that he wasn’t in Cambodia, it wasn’t Christmas, Richard Nixon was not President yet, that the Khmer Rouge were not a fighting force yet, that large noisy Swift boats wouldn’t be used for secretive missions, that we were not gun-running at the time, that no crew member will collaborate the story; other than that what is the problem?

Actually every time I read more details I keep hearing that song from Mel Brook’s "The Producers" in my head. Only "Springtime for Hitler in Germany" becomes "Christmas for Kerry in Cambodia, Swiftboats working with the CIA , we are lying at a faster pace, look out – Kerry has more than one face."

Ziggy Stardust and the Liturgists from Mars

All the makings of a parody