Home Other Personal 2017 Year in Review
Other

On social media I quipped:

I am fairly happy to see 2017 go as it was a rather rough year for me. Transitions both good and bad.

A year ago I had no idea that my wife was in her final weeks of life. She was originally diagnosed with cancer in December of 2013. While the cancer was treatable, she refused any treatment. This was mostly due to some bad experiences in hospitals and that she was super-sensitive to many drugs. She was more afraid of chemotherapy than the cancer itself. This was despite all the encouragement we gave her to help her over this. I talked to a priest about this and he related similar stories for me regarding people who refused treatment, especially among Filipinos.

At the time they said without treatment she would only survive a year to a year and a half. So at the two year mark with no outward signs of it getting worse, I had some hope that she might survive this. As three years went by with no exterior effects that hope grew. What I did not know at the time as we entered that new year, was that she was hiding increasing pain. This soon became apparent in the final two weeks of her life. That last week being spent in the hospice with here where our children and myself stayed with her.

So I deal with a lot of guilt concerning what might have happened if she had received treatment. After 36 years of marriage there is a palpable absence in my life. Generally I don’t tend towards depression but I keep being reminded that I am not as stoic as I think I am.

This led to another change. Making burial arrangements I found that a parish near me had a mausoleum and that this was the only parish with it’s own cemetery. This cemetery is located directly behind a historic wooden Catholic church. They have daily Mass there and the Latin Mass on Sundays. When my wife was alive she preferred to go to Mass at different parishes each week. I am more of a creature of habit and prefer something steadier. So I started attending the Latin Mass and afterwards walking to where my wife is entombed and to pray the Divine Mercy chaplet.

So I have become much more familiar with the Latin Mass this year and really enjoy it. I have traditionalist tendencies, but am not a jerk about it. I also go to daily Mass, which is the Ordinary Form. Besides the Latin Mass on Sunday, I have recently taken to going to the Vigil Mass in the parish I was received into the Church. This leads to a liturgical Deja Vu, since Christ the King is celebrated at different time in the Ordinary and Extraordinary Form.

After I started to attend the Latin Mass I was asked to join the choir. This was rather remarkable since this was a result of them hearing me singing, and asking me despite this. Now I do love to sing and spent four years in High School choir. Still I know my limitations and while I have a decent voice,I definitely don’t have perfect pitch. Very imperfect pitch. So I have spent some time last year practicing, and this year will be the same. I also started to teach myself piano as an aid to this. I have greatly enjoyed singing with the Latin Mass choir, but struggle with the chant. At least my Latin pronunciation is improved. 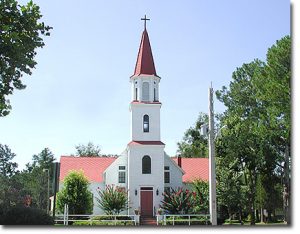 I also joined a local chapter of Saint Paul Street Evangelization (SPSE). I had heard of them from Catholic Answers Live and it sounded like a structured way I could evangelize. As a bit of an introvert I had plenty of excuses why I was not doing my bit in the Gospel call. My wife prayed for me for years and was instrumental in my conversion and so after her death I felt I should be doing the same. I am still humbled to find myself a believing Catholic and really want to share that joy. My outings with SPSE have been wonderful. When I heard them on Catholic Answers Live they explained their non-confrontational approach as they were there to hand out rosaries, medals, brochures and to answer people’s questions. We set up our stand by the beach and it is very positive experience just talking to people. People either are or are not interested, and most people not interested are not jerks about it. I am hoping to do more of this, this year. 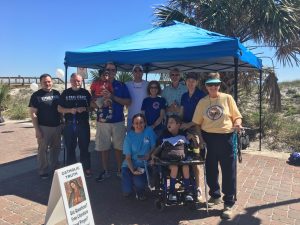 Another major change for me was my weight. I have always struggled with my weight and have gained and lost significant amounts over the years. A couple of years ago I reached 290. I needed a consistent approach that I could make into a habit. The first thing that became an important part of solving this was getting an Apple Watch about two and a half years ago. It tracks calories, heart rate, and daily exercise. Three rings are used to show daily progress. So this was my daily impetus to walk and exercise. I hated the idea of not filling out the rings each day, so this was enough of a mental trick to keep me going. Consistent exercise did lead to me dropping about fifty pounds, but I was pretty much staying at the same weight. Last January I read posts on Facebook by Jimmy Akin on intermittent fasting, which his doctor had suggested to him. For him this took the path of eating just one meal a day that was mostly low carb. I had already started the practice of fasting on Fridays, so I knew this was doable. To start with I just cut out all snacking and just having lunch and dinner. Transitioning to only eating dinner was easier than I could have suspected, but this was mixed in with the time my wife was in hospice and in the aftermath. During the work week I stopped coming home for lunch and so this helped. The most counterintuitive part of intermittent fasting is that you are not hungry and that your body quickly adjusts. At least for me this was true and there is nothing that is the same for everybody when it comes to diet and exercise.

As far as exercise goes I started by doing more walking. At work I took walking breaks. This year those walking breaks turned into a praying the Rosary while walking and then at 3:00 P.M. praying the Divine Mercy chaplet while walking. At first I thought of this as killing two birds with one stone. I quickly realized that walking while praying was very beneficial in reducing distractions for me. Prayer could actually break out among the distractions. Originally I was also spending an hour on a Exercycle while reading. This year I bought a bike and started doing daily rides in my neighborhood and elsewhere. These daily rides are now about 14.5 miles each day with 20 or more miles on weekends.

As a result I lost 88 pounds this year with 142 pounds lost overall in the last two and a half years. This is to the point where I have been holding steady at around 148 pounds. It still freaks me out to be buying size small shirts. Despite having lost the amount of weight I desired, I am too aware of my previous losses and gains. So I am maintaining the same level of daily exercise along with intermittent fasting most days. As for diet I pretty much follow low carb where mostly I stay away from sugar and breads. This works for me, especially as I have found many substitute ways to cook low carb meals that doesn’t leave me craving previous favorite foods. 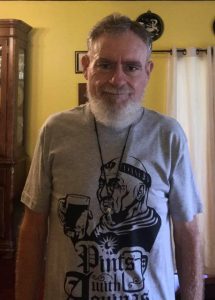 Me recently in my Pints with Aquinas shirt

There have been some other difficulties this year which I will not go into. Although one major difficulty is showing fruit of becoming more positive. I ask for prayers for this special intention. There are some things I am hoping to come about in 2018. Time will tell. What I do know is I don’t know where I would be without my Catholic faith.

I wish you a Merry Meme

The View from Christ's Shoulders

On my home turf

I wasn't aware that one of the three...

What’s in a name?

Jeff, this may sound useless, but try not to feel guilty about your late wife’s decisions about how to treat (or not treat) her disease. The decision was ultimately hers in the end. But I can imagine that reality was and is hard to bear.

Also, I never told you, but seeing you write about your experience with SPSE was one thing that got me off the stick and starting a local chapter here in MN. No beaches but we’ve had good conversations at Walmart!

God’s Peace for the year ahead,
Susan

Thanks for sharing Jeff.

Have a Blessed 2018 and long story short… please continue to keep me in your prayers.