The Rolling Stones defy the Pope

So I noticed this series of headlines:

An insider on the tour added: “The band’s team were flabbergasted when the Vatican got in touch via letter and couldn’t believe their eyes.

“As much as they didn’t want to upset the Pope, they had a contract in place to play on the Friday – and in their mind they were going to honour it. They have made a promise to the Cuban people and won’t let them down.”

My spidey-senses are tingling and my first instinct is to call BS on this story (my second and third instincts as well). First off the story is being shaped as “Pope bans”, when at most it might have been someone in the Vatican. Even that seems rather fishy. Where is this letter they received? Seems to me that if The Rolling Stones management ever actually received such a letter it they would make the most of it by posting it online. It makes great publicity.

I really don’t think the Vatican is going to get involved in rock band tour dates.

Although I remember when the Vatican’s semi-official newspaper L’ Osservatore Romano decided to get into music journalism and released a list of the top ten rock and pop albums of all time.

At the time I envisioned their new direction which thankfully didn’t bear out. 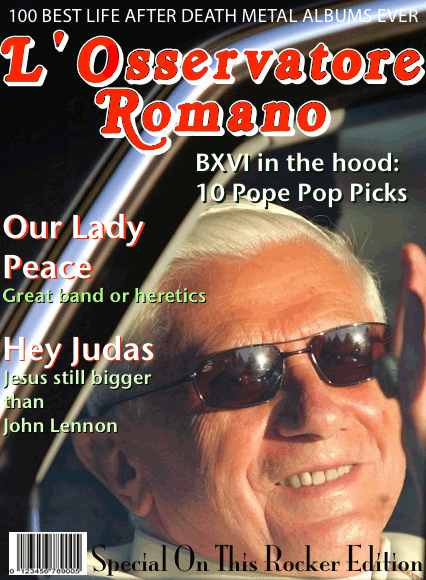 A Thanks to Mother Angelica

“The Rolling Stones defy the Pope”

Hey Jeff! There’s so much crapaganda, “I” mean propaganda going around about what Catholic Popes have said in the past… Long story short… Even if “I” do say so myself… if you’re not careful, YA might just go crazy and/or go back to joining some of those old atheist cells YA might have worshiped before becoming a good Catholic…lol… 🙂

God Bless you and yours

Was Victor a Chief like us Jeff? Bet he would tell some great stories in the Club.
Tom HMC Ret

Your pathetic religous world.
How old is Christianity ?
Ever Heard of The Emporer Constantine ?
Learn the shallow roots of your terrible belief system..
The Bible what a load of utter rubbish, return To the caves with islam and leave society / young boys, alone..
I stumbled upon this site unfortunatly whilst reading about the rolling stones.
Read and understand the poison of the Catholic church, denouncing jews To the third Reich, the rape and abuse of children/ then a terrible attempt by a pope (aparantly chosen by God ) To protect the guilty priests… The enormous wealth of the Vatican … The list is endless…
Religion poisons everything…
The world is slowly understanding the pollution religion leaves..
Go back To your faith belief goat hurding sexist shallow hole, and have a deep think..
God created the world in 7 days !!!!! Okay lets have some scientific explanations, Not just one ?
The solar system, the galaxies, the océans, all those millions of years before the fantasy of jesus aparantly existed… A little explanation ?
What about the Chinese during the supposed Time of jesus, amazing To think why God fucked a supposed Virgin in a barbaric, chaotic, supersticious dusty land…
What about Pagan festivals…? Christianity is poison, sod off