Home Punditry “Mr. President, you’re really pushing kind of aside some of your greatest supporters.”
Punditry

“Mr. President, you’re really pushing kind of aside some of your greatest supporters.”

Timothy Cardinal Dolan, the archbishop of New York, made clear that the Catholic Church remains adamantly opposed to the president’s health-care law because of what the Church considers its assault on conscience rights. “We bishops have been really kind of in a tough place, because we’re for universal, comprehensive, life-affirming health care,” Dolan said on Meet the Press, noting that the Catholic Church in the United States has supported the goal of universal and affordable health care for almost a century.

But the so-called HHS mandate, which requires coverage of 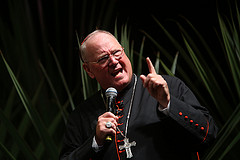 contraception, sterilization, and drugs that may be abortifacients, without any co-pays, on all health-insurance plans, has made it impossible for Catholics to support the president’s efforts, Dolan said. “Mr. President, you’re really pushing kind of aside some of your greatest supporters. We want to be with you, we want to be strong, and if you keep doing this, we’re not going to be able to be one of your cheerleaders,” Dolan said. “That sadly is what happened.” (source)

While I can certainly understand some of the points Cardinal Dolan is making here. I think it also plays down or ignores other aspects. For example it was not the tacking on of the HHS mandate that made Obamacare morally unacceptable. The mandate just made it even worse. The U.S. Bishops were in the majority opposed to this act before the HHS Mandate which occurred only after the passage of the law. The very law itself had significant moral problems.

His statement “Mr. President, you’re really pushing kind of aside some of your greatest supporters.” also seems rather hyperbolic or a kind of diplomacy in place of truth. The assault on our faith by this President has extended across multiple lines beyond just the “Patient Protection and Affordable Care Act.” The idea that Catholics could be his greatest supporters if only he put aside the HHS Mandate is rather laughable. Yeah if he would just put aside his support for abortion, infanticide, contraception, so-called same-sex marriage, ordered drone strikes with oversight or accountability, assault on religious liberty, IVF, three-parent embryo creation, and a whole laundry list of morally problematic thrusts by his administration we would be great friends! We are called to love our enemies not whitewash away what makes them enemies.

Maybe I am being too hard on the Cardinal here who is obviously trying to balance prudentially calling out something without being belligerent. Yet I wish this prudence included not making a statement so obviously untrue.

“Did Pope Francis really say that? Probably not”

Was it ever alive?

I wish they were debating something else

How can any Catholic (or human for that matter) support the man who voted against “The Born-Alive Act”?

Cdl Dolan,more the politician than a priest?

I am very disappointed in Card Dolan. I didn’t see the interview, thank goodness. I would have lost it. What is he thinking? This administration is going from liberal to lawless. They have no respect for the Catholic Church nor inalienable rights. I am not in favor of comprehensive anything from this government as there are very few things the government in any situation can do right. What is he thinking? Another cleric who should stick to his area of expertise, teach bases of the faith and let competent laity work in areas of their own, like politics and health insurance policies.

Do you really think Cardinal Dolan was talking about being “great supporters” of Obama in general? Or “great supporters” specifically “for universal, comprehensive, life-affirming health care?” I’d assume the quote needs to be taken in context. I’m be surprised if Cardinal Dolan were actually suggesting “great support” of the totality of Obama’s policies, versus specifically the idea of “universal, comprehensive, life-affirming health care.”