At first glance the new Catechism would give me 70s flashbacks and the thoughts of felt banners. I mean a youth catechism called YOUCAT

with a cover that looks like it was designed in that era would not give me much confidence. The title just annoys me as the concentration seems to be on “YOU” and the last thing we need is more narcissistic considerations. Don’t judge a book by its cover or title is the operative phrase here.

There was some scandal dealing with the translation of the Italian edition of the YOUCAT and the criticism of the translation was well deserved since it suggested that contraception could be used within marriage. The english version does not have this problem as it addresses the question “May a Christian married couple regulate the number of children they have?” correctly in regards to Church teaching.

So here are my thoughts after reading through the YOUCAT. For one this is a high quality piece of publishing. This book was meant to be read and thumbed through and referred to again and again without falling apart. The paper is also glossy and highly durable. The content follows the standard four parts of the CCC and traditional Catechisms with similar sections. It is kind of a cross between the brevity of the Compendium of the Catechism of the Catholic Church (CCCC) and the CCC. The format is a question followed by a short summation of the answer with references to the CCC. In most cases this is followed by one or more paragraphs going into slightly more detail. Normally this is limited to one short paragraph.

The layout is a major departure from previous catechisms in that it is much more aesthetically appealing. The page is split up into sections with several quotes along the left or right margins and the content using black text on a darker yellow background. This makes the page pop out and I found it to be easily readable and pleasant to look at. New to a catechism our doodles. Yes doodles, there are plenty of doodle are throughout this catechism. This are doodles of the stick figure variety that sometimes are used to amplify the text and sometimes just decorative. After reading a third of this catechism it donned on me that the doodle are on the bottom right page were intended to be used as a flipbook animation. Sure enough if you grasp the YOUCAT between your thumb and fingers and let the corner page flip by you will see an animation of the stick figure moving along the page. Now as a board certified Catholic pundit I should have all kinds of vitriolic comments about such a thing in a Catholic Catechism and be declaring anathema to all doodles! That the person responsible for  the horrible clipart and line art used in so many parish bulletins got assigned to the YOUCAT. My actual opinion is that the doodles don’t really distract from this catechism and even add some character to it. You mileage may differ and that is totally understandable. 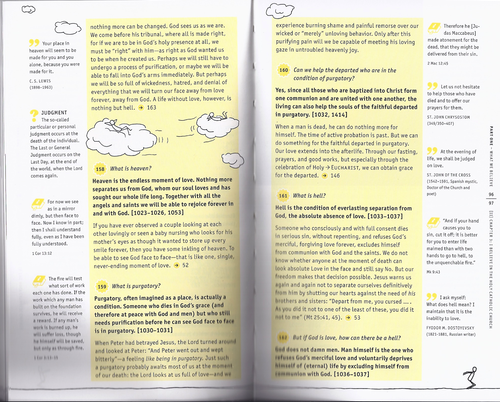 Sample page from the YOUCAT.

Baring in mind the translation problems of the Italian version of the YOUCAT I didn’t find any really major problems with the text of the Ignatius Press version. With shorter paragraphs you don’t always get the level of detail for an answer you might want, but there are the CCC references and of course the YOUCAT is not meant to be a replacement for the CCC. The estimable Fr. Finegan had some valid questions concerning one item, but the paragraph of text after what he quoted from had more detail on the answer – though maybe not to the level he was looking for. I did not find it as problematic, but someone could come away confusing natural and artificial as the distinguishing emphasis between a contraceptive act and NFP.

Now the question is would I recommend the YOUCAT? Well I could be as blithe as saying “Different strokes for different folks. Most people aren’t like me and they see the size of the CCC to be rather daunting. Being a constant reader the size of the CCC to me was an argument in its favor. I also liked the Adult Catechism the USCCB put out, but it is only slightly smaller than the CCC. The Compendium is the shortest read with the YOUCAT being the second shortest. I am not the intended audience of the YOUCAT being a 52 year old man and I am still waiting for the Get Off My Lawn Catechism of the Catholic Church. Regardless I see the YOUCAT as viable for many youth, but with the variance of people some youths might prefer the CCC or Compendium instead. Ideally the YOUCAT should be used with the CCC where someone can read and look through various questions and dive down into the CCC for a more in-depth treatments of subject via the CCC paragraph references.

I certainly think the YOUCAT has its place and I would like to see some aspects of it in the CCC. No not the doodles, but I loved the quality paper and use of layout and colors to make it aesthetically pleasing. The selection of quotes along the margins are of a wide variety and I thought very well selected as they were correlated with the text of the section they were in. There are a lot of great quotes here where again and again I wanted to copy them down.

This is a serious argument?

New Proofs for the Existence of God: Contributions...

The Consciousness of Christ

Of Love and Evil

Book Review – The Apostasy That Wasn’t

nice review… esp like the “Get Off My Lawn Catechism of the Catholic Church”.

I’ve got a copy of the Dutch Catechism you could borrow, if you’d like?

Please contact me when the GOML CCC is available. Thanks.

Than ks for the review. I haven’t had time to check it out myself, but now I’m gonna order a couple for the teens that I know.

Would a hard cover edition of YOUCAT be an appropriate gift for a grandchild with a high school knowledge of the Faith?
Also, do all branches of Ignatius Press stock this?
TeaPot562

Hey, if you don’t like YOUCAT, I’ll take it off your hands. 😛

…I’ll also try to keep off your lawn.

How does it compare to Catholicism for Dummies? (I only read the contraception section but it looked authentic Humanae Vitae)

I’m a teenager and I see no problem with the CCC. If you can’t understand the full Catechism than you need to learn how to read.

The stick figures look like something from “Christopher’ Tales”, which is an excellent resource for early faith formation.