Home Book Review A Postcard from the Volcano
Book Review

A Postcard from the Volcano 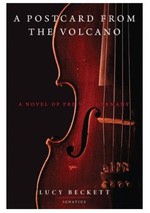 Not long ago I heard Joseph Pearce recommend a novel that he put in the same league as Evelyn Waugh’s Brideshead Revisited. That is a pretty extravagant claim, but I trust Pearce’s literary judgment generally and so ordered A Postcard From the Volcano: A Novel of Pre-War Germany

to read. I don’t have the literary skill set to be able to judge how accurate this comparison was – all I can say is that this is one of my favorite novels ever.

The novel basically starts in pre World War I Germany and follows the life of Max from boyhood on as he lives through this difficult time in history and both grows up and grows in wisdom. A great Catholic novel does not have to have hit-you-over-the-head Catholic themes, but presents the truth of the human person in a way that enables you to reflect upon it. The characters are so alive in this book, that I would have to remember that it was a book of fiction and not a historical drama based on the lives of actual persons. I wanted to be able to enter into conversations with them to both interact and to learn from them. The last page of the book brought to me a sadness in realizing that the novel was over, even though the ending was quite apt. I just did not want this book to end – which I don’t feel very often in a 500 plus page novel.

While much of the novel does not deal explicitly with Catholicism, as the story goes on those elements become more prominent at a philosophical level as the characters deal with the growing madness around them. In the midst of human depravity there is still always room for Christian hope and especially to pursuing/adhering to truth. I really wish I did have the literary capability to give this book the review it deserves and can only stumble in describing this novel. I can only give it my highest praise by saying it goes on my reread list .

Here is an interview with Lucy Beckett that IgnatiusInsight did with her for a previous book – which I will have to get.

Tiber by the way of the Thames

What we can’t not know

Between the Savior and the Sea

Study Guide for The Lamb’s Supper

I recently received this book from amazon but have not yet started it. I saw the plug from Ignatius (and the interview w/Lucy Beckett) and was intrigued. My grandpa came to America after WWI (in 1923) and he was originally from the Prussian part of Germany.

[…] Postcard From the Volcano: A Novel of Pre-War Germany by Lucy Beckett.  Just loved this novel and another one that remains with me […]