That will never work

It seems that more and more if you want to find what a bill doesn’t do is that you read the title of it. The title is an indicator of exactly what the bill will not achieve and that in fact the opposite will happen. In the build-up for embryonic stem-cell research we have had plenty of laws with titles opposing human cloning while actually supporting it via redefinition of cloning.

The latest travesty is HR #3312 “Reducing the Need for Abortion and Supporting Parents Act.” Which of course means funneling $700 million dollars to Planned Parenthood and other similar groups.

American Papist has been doing great work exposing this bill I would suggest you This type of approach is oh so reasonable and suggest some other legislation that would work just as well.

The USCCB was exactly right in calling it the “Planned Parenthood Economic Stimulus Package of 2009.” No surprise that the usual Culture of Death suspects fully support this.

The bill like almost all bills is a mixed bag with some positive mixed with a lot problematic things with lots of leeway to make them more problematic. One of the answers in the bill is even more money towards “comprehensive education on preventing teen pregnancies.” Gee they never funded that before. The old “please delay sexual activity” while showing you the proper use of all the different contraceptives.

How about grants for Crisis Pregnancy Centers? Yeah right, you can be sure these centers will never qualify under “Family Planning Services.” Give the Pill and Kill is what these services do.

The Hell with reality though – let us just keep up the drum beat of “more contraception” and more “sex education”, it will work eventually, someday, when it gets to the right level don’t you know. Just close you eyes to contraceptive failure leading to abortion. The contraceptive mentality or the right to not get pregnant due to the natural consequence of sexual activity must be ignored. Let us also demand the right to eat all we want and not get fat – which is really unintended obesity.

One of the joys of being Catholic is that you can see reality more clearly and don’t have to pretend to not see the obvious. Though it is a bittersweet joy since seeing this reality is rather frustrating when so many are comfortably ignoring it. 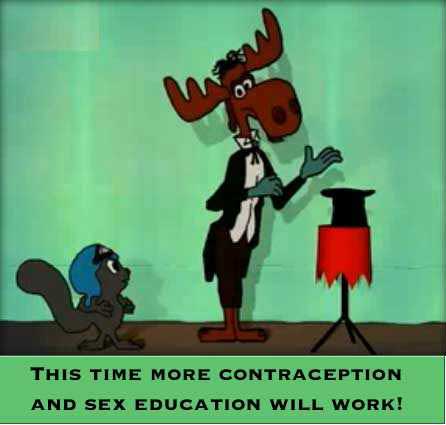 The elderly are just too darn expensive

A paradigm shift toward the absolute

Right… cause planned parenthood only aborts babies they don’t do free condoms or put anyone on the pill or offer counseling or advice….

“Unintended obesity” thats great. I have to remember that one.

Planned Parenthood “educates” the public, including young people, in the contraceptive lifestyle, provides/sells the contraceptives, receives funding to do so, AND solves the problems of contraceptive “failure” and pregnancy from their comprehensive sex ed by offering/selling abortions.
As my daughter said when she was 14, “Planned Parenthood is like the Philip Morris of abortion.”
They receive money to create problems and to “solve” the problems they created.
A PP volunteer once declared to me on the sidewalk that “Of course we need abortion. What are we supposed to do when the contraceptives fail?”
What, indeed? How ’bout waking up to the reality that sex is not a recreational activity, and that its natural result is new life? But no, who would haul in the money then? Besides, how would men and women survive without the license to exploit one another and erase the results of their self-indulgence?
Why does Planned Parenthood have so many politicians and so much of the media in its pocket?

Bullwinkle: this time for sure, nothing up my condom…

Bullwinkle: Guess I don’t know my own strength.

And someone is surprised by the advancement of the culture of death that is increasing exponentially? And with the help of many ‘catholics’ I might add.

Introduced by my “Catholic” congressman Tim Ryan of Ohio who was recently kicked out of Democrats for Life’s board. Here’s hoping Bishop George Murry has the (insert favorite anatomical part here) to do something about this publicly.

This is one positive achievement of the dialogue Fr. Jenkins started at ND in May. More will follow.

I love it when a plan comes together!

I blame ND and Fr. Jenkins.

Top shelf response to the PP-does-more-than-abortion canard joanne. Yours is my quote of the day.