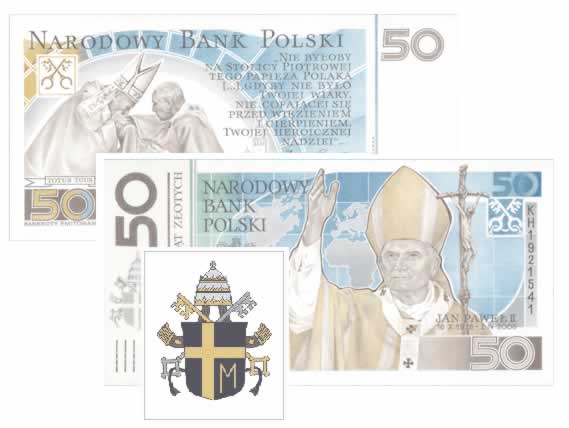 John Paul, born Karol Wojtyla in the Polish town of Wadowice, is revered in his homeland, where he helped to inspire the pro-democracy Solidarity movement in the 1980s.

The National Bank of Poland’s special notes have a face value of $16, and sell for $29.

The front of the bills feature an image of John Paul II holding his crucifix-topped staff against a background of the world map.

On the back, John Paul is depicted kissing the hand of a Polish cardinal. The design includes a quote from the late pontiff: "There would not be a Polish pope at the Holy See if not for your faith, not backing down when faced with prison and suffering, your heroic hope."

Vuong Anh Toan, 39, who has lived in Poland since moving from Vietnam 10 years ago, bought three bills for his wife and son.

I am torn between this being really cool or an opportunist money making gimmick to take advantage of the late Pope’s popularity . And in this case they are literally making money to make money.

Take this Day and Shrove it

I’m the Pope and I have approved the...

It’s cool and opportunistic, but I’ll emphasize the cool ’cause I like it and I don’t think it’s disrespectful.

Usually, people whose faces end up on their country’s currency are those whom their country considers important, like monarchs or national heroes or achievers. If I remember right, does not Sir Edmund Hillary appear on New Zealand’s currency? THere’s no reason why JP2 can’t appear on Polish currency. JP2 is an important Polish figure even on the purely cultural and historical level.

I doubt you’ll see JPII on the Euro, though.

The Peruvian 200 soles note (the largest in circulation) bears St. Rose of Lima. No “gimmick,” though, it’s been there since they went to the new currency over a decade ago.