In my Naval career we repeatedly had training in putting out fires. After some disastrous fires at sea such as the one on the U.S.S. Forestall the Navy decided it was not a very good idea to limit training to a specific group and instead expanded fire fighting training to everyone. Besides learning to be competent on a hose team and using the various equipment in emergency situations we always had training on the fire triangle. 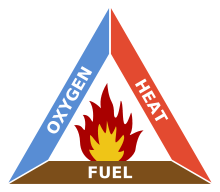 It is a good training model since it emphasizes that to stop a fire you just need to remove just one of the elements. Remove the fuel, reduce the heat, or remove the oxygen and the fire will stop. I always though that this was a good training aid and I started to think it could be an aid in other situations.

Many times on Catholic radio I have heard people ask questions about whether something is a mortal sin or not or what constitutes a mortal sin. 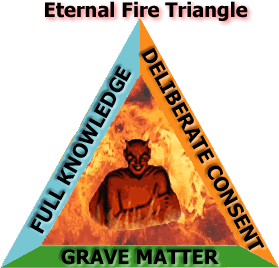 One thing to remember that even when all the conditions are not met that there is still damage done and the consequences due to sin. Committing a grave sin even when you are invincibly ignorant does not let you off scott free from temporal punishments, just eternal ones.

Grave Matter. Obviously first and foremost is to be aware of what constitutes grave matter so that you may avoid it.

CCC 1858 Grave matter is specified by the Ten Commandments, corresponding to the answer of Jesus to the rich young man: "Do not kill, Do not commit adultery, Do not steal, Do not bear false witness, Do not defraud, Honor your father and your mother."[132] The gravity of sins is more or less great: murder is graver than theft. One must also take into account who is wronged: violence against parents is in itself graver than violence against a stranger.

CCC 1859 Mortal sin requires full knowledge …. It presupposes knowledge of the sinful character of the act, of its opposition to God’s law.

CCC 1859 …It also implies a consent sufficiently deliberate to be a personal choice. Feigned ignorance and hardness of heart[133] do not diminish, but rather increase, the voluntary character of a sin.

Grace and following the universal call to holiness are the true eternal fire extinguishers. Just avoiding mortal sin itself can get you to fall into the minimum daily allowance trap. Fear of the Lord is the beginning, but not the end of wisdom.

As the old joke goes "Only you can prevent eternal fires."

I only wish this was parody

How to Address a Dissenter

Eye of the Tiber

Put a Pope on it!

I definately want fries with that one, Hoodlum.

Heh heh. Why do I suspect I might’ve inspired this with my comments on the CA quiz?

“If you need a good Powerpoint slide for CCD consider the Eternal Fire Triangle, though Powerpoint itself was surely inspired by one of the Devil’s minions.”

Sorry, that wouldn’t be morally licit: evil means to do good, you know.

Thats brilliant. I need to remember this slide when that question pops up at Youth Group. Maybe print it out and have it on hand (because the question will come up).

Excellent teaching aid, on a par with St. Patrick!

For a logo, maybe “Papa Smokey” with a ranger’s mitre and a crook? Hee hee.

A complete aside, but one inspired by his post, but it seems that the blog’s author was “an atheist in the foxhole,”. It seems that atheists do risk their lives for the rest of us, and do not seek out god during times of crises.

Unfortunately, with today’s culture and instruction, most people’s reaction would be:

“Who’s that guy in the middle?”

Ahhh yes, the military equivalent to hell: Death by Powerpoint!

The smallest sin is equal with the greatest. Sin is sin. “For all have fallen short of the Glory of God”

The only way to be saved is not by works, but by recognition that Christ died for all sins and that nothing we as humans could do would save us without Christ.

“It is by GRACE that you have been saved, that it is a gift of God, lest no man should boast”