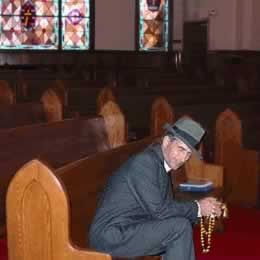 Hi my name is Benedict Homes of the St. Anthony Detective agency. I am a Catholic detective specializing in all things Catholic. Some of my friends have joked that I am a Dei-tective. I am not your typical detective since I wear a scapular made out of Kevlar and carry a backup Rosary in an ankle holder. You can find me most days at my parish in front of the Blessed Sacrament when I am not actively on a case or sometimes when I am. Most of the time I help people find lost things, but mainly those jobs are fairly easy with the help of St. Anthony, my partner, who never asks for a finder fee. If someone has lost their faith I spend my time in prayer interceding for them.

From time to time I help to investigate allegedly supernatural occurrences to see if their is any validity to the claims or whether it is a hoax. Unlike other investigators of the supernatural I don’t think that "The truth is out there." I know exactly where to find the truth since he is also the way the truth and the life!

Recently I had a couple come to me with concerns about their son. They had sent him to a Catholic university and when he came home he was spouting all sorts of secular nonsense and now held that the faith is nothing more than a series of myths imposed by male hierarchical figures throughout the centuries. I started to investigate the university and my worst fears were confirmed. Yes another case of Catholic Identity Theft! Catholic Identity Theft is a pernicious crime that is all too prevalent. You can find it at those Catholics schools of higher learning where they talk about their Catholic identity on an "About" page, but their curriculum, actions, and everything else is diametrically opposed to the truth of the Catholic Church. They will talk about Catholic identity while having coed dorms and if the Church’s teaching on modesty is mentioned it would be in a sarcastic way to be mocked. When you encounter this you will more often find Sister Mary Modernist than Sister Mary Magisterium. The V-Monologues and not the Dialogues of St. Catherine of Sienna, Virgin. Where multiculturalism is good unless it is authentic Catholic culture.

Catholic Identity Theft is a serious crime and it is fairly easy to see some of the signs leading up to outbreaks of it. I have learned in my investigations that other crimes are precursors to this theft, for example Crucifix theft. You will often find that someone has stolen all of the Crucifixes from the walls of the classrooms. Sometimes you can subsequently find them in boxes in the basement stacked next to moral theology textbooks that used words like mortal sin. The other crime I have noticed is clerical clothes theft. I can only charitably guess that someone keeps going through the priest’s laundry room and stealing their clothes and their roman collars. In desperation they have to find ill-fitting clothes to wear instead. 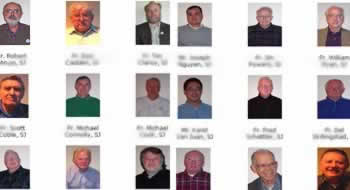 Grand Theft Theology (GTT ) is also another closely linked crime. The perpetrator will replace the constant teachings of the Church with modernist clap-trap that has the intellectual depth of a J. Lo song, thus depriving the student of the fullness of the truth. You would think this bait and switch would be covered by consumer fraud laws, but it isn’t. Unfortunately many students don’t even notice this substitution which is like buying a Rolls-Royce and getting a Yugo delivered. "I spend 40K plus dollars on a Catholic Education and all I got was heresy" might be a funny t-shirt, but the reality is much less funny.

Catholic Identity Theft is not a new phenomenon. Fifteen years ago Pope John Paul II noticed the increased rate of this crime and wrote the Apostolic Constitution Ex Corde Ecclesiae.

While the plan the Pope laid out was excellent it had one major flaw. It had to be implemented by the local bishops in cooperation with this Catholic educational institutions where the word mandatum was thought of as fondly as the spikes inside of a Iron Maiden pressing against your skin. This document was quickly filed under "I" for ignore in many diocesan offices.

Catholic Identity Theft seems to be based on the proposition that the truths of the Catholic Church must not really be true. What else can explain the defense that since most Catholic schools have students that are not Catholic, that somehow Catholic truth does not apply to them. That natural law is "nothing else than the rational creature’s participation in the eternal law" if they happen to be Catholics otherwise forget-about-it. That pluralism means that truth is something personal to the holder instead of something that we all share. The fact that scripture says that is the Church that is "the pillar and bulwark of the truth" is an inconvenient fact that needs to be subservient to "different strokes for different folks." That tolerance means being intolerant of truth.

Now as a Catholic detective it is easy to discover Catholic Identity Theft, but not as easy to put a stop to this crime or to keep it from from happening. It is not as simple as hiring a security company and putting security stickers on the windows of the schools buildings. With Catholic Identity Theft it is pretty much always an inside job. The culprits are on the the faculty and mostly aided and abetted by the school’s president. Setting up a neighborhood theological watch can be helpful to getting the word out about recent thefts. For example the Cardinal Newman Society is a good model for a neighborhood theological watch. The cause is not in any way hopeless. Schools like the Franciscan University of Steubenville were headed towards having an Catholic Identity Crisis and then had a major turnaround after Father Michael Scanlan became president. Notre Dame also seems to be on the upswing. Now some of my clients have asked for my expertise on stopping Catholic Identity Theft and here are some basic suggestions.

Now if your kids are already attending a school where this crime has occurred you can try posting posters saying "Missing Catholic Identity" around the campus. Putting the same on a milk carton doesn’t work around a college campus – but on a beer bottle it might.

"If need be, a Catholic University must have the courage to speak uncomfortable truths which do not please public opinion, but which are necessary to safeguard the authentic good of society." Pope John Paul II

This applies to all of us. As a Catholic Detective I constantly strive to seek the truth, but isn’t that all of our’s vocation? Well I need to go now and work on the "Case of the missing scapular." I just hope that scapulars and socks don’t end up in the same place or I won’t get a commission for this case either.

The Breakfast of Constructionists

It's a thriller, not an attack on the...

Is the term “Deitective” copyright? “cause, if I ever get my own blog, that’s what I might end up calling it…

It’s just sad that these heinous crimes were never on the statute books here, or my arrest record would have been phenominal…!

The satirical mind of Jeff Miller,…

I don’t think you were being fair to J-Lo 😉

Our personal holiness is essential for renewal! Thanks for listing it first!!!

Am I the only one to notice that this “Deitective” forgot to remove his fedora before entering the church?

I LOVE this Jeff!

“If there is much talk about the Spirit of Vatican II, but actual Vatican II documents have an inch of dust on them…”

To this I would also add the Catechism of the Catholic Church.

Other clues I’ve uncovered of CIT:
– No pictures of Pope Benedict XVI (or there’s a funny mustache drawn on him)
– The DaVinci Code is part of the curriculum
– They hand you an invitation to their upcoming Voice of the Faithful get together
– They have to think a minute or two where their campus chapel is located, but they immediately and brightly tell you where the condom distribution center is!

*bangs head on desk* It took me a minute to realize that the priests in that picture look awfully familiar.
The one top row, third from the right is particularly awful as far as manner of dress. Never tucks his shirt in. The gentleman to the right of him, however, must have been caught on an off-day: he normally wears clerics on campus. Yeah, I know, one out of 18 is not a great statistic…

Hey, there are a LOT of cases of Catholic identity theft in my town… we need not just one Deitective, but a whole squadron of them here.