Home Humor This Mass has been rated
Humor

This Mass has been rated

Via Crowhill.net comes this story.

DALLAS – (KRT) – In the main church, the organ booms as the 160-voice choir sings "Christ is Made the Sure Foundation."

In the smaller chapel, worshippers receive Communion to the solemn strains of "Adoramus Te, Christe."

In the auditorium, the congregation is on its feet, clapping to a jazzy version of "Blessed Assurance."

And it’s all happening during the same worship hour and in the same church – Dallas’ Highland Park United Methodist Church.

Many churches have added contemporary services to their Sunday morning menu. Highland Park, however, is setting out a worship buffet. In addition to the traditional service in the sanctuary, worshippers can opt for an Anglican-style "high church" or a contemporary worship called "Cornerstone."

"It’s not unlike a Cineplex. You have all these choices in one place, and you can pick the one you want," said Paul Rasmussen, an associate minister who heads up the Cornerstone service.

A cineplex might be a good analogy for some modern churches especially since people go to movies for entertainment and increasingly go to church and demand to be entertained. They want a hip soundtrack (hymns), snack bar (coffee and donuts and some mega-churhes now have Starbuck franchises in them), good script (Bible and homily) and exciting acting (charismatic preacher). No car chases or gratuitous sex, though we do have chariots being swallowed up in the red sea and Jezebel! Crouched in all this it’s all about me entertainment are references to God and feel good theology that don’t let that "sin no more" stuff get in their way. Worship due to God becomes more like the third gaffer at the end of the screen credits. Hey we couldn’t have done it without him, but my being entertained is of primary importance.

Now this idea of three services at once has been done before, only before it was called a three-ring circus.

Though maybe we can learn from the idea of movies and the cineplex. In some Catholic Churches we already have a variety of Masses such as the following example:

Now this is type of diversity I can fully get behind. I love the Latin Mass (Tridentine) and is my first preference. I also have no problem with the Missa Normativa whether fully vernacular or partially in Latin. My only real requirement is that all forms are conducted with reverence and within the norms of the Church.

Though I do wonder about Mass marketing and tailoring the Mass to the individual where theological questions would vary in the same parish from Mass to Mass. For example an 8:00 Mass conducted within the rubrics of the Church, one at 10:00 that was mildly heretical, and one at 12:00 that was full blown heretical fair conducted by a women priest. Maybe we could come up with a Mass Rating System that gets displayed at the start of Mass like the rating at the start of a movie.

Than we could have those content letters added like the D, L, S, V in TV ratings.

Now obviously I am jesting and don’t want any rating system since all Masses should be conducted with reverence according to the norms within their particular rite. Though maybe like at the start of a movie I wouldn’t mind the message about turning off cell phones and that silence is golden. 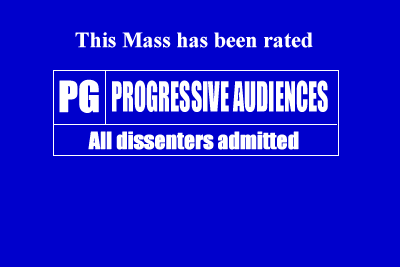 The Pope and Books

Signs of inhabitation by a Liturgeist

Kick up your prayer life!

So very true…What a wonderful articulation of my exact sentiments. I passed by a “Bible Church” last sunday. It was one of these mega-churches with a starbucks, many worship halls, a gym, parish hall, etc. What got me the most was it’s two private parking garages like you would find at the mall.

I could not have said it better myself Jeff, you are even funnier while hitting the point.

Might I add an A for “Anglican-Use”? This would be most certainly above PG on your rating list.

If the listings were posted on rottentomatoes.com, now THAT would be useful….

Highland Park is the ritz area of Dallas. how about a champagne and caviar communion?