A reader pointed me to this Resurrection Crucifix at Emmaus Catholic Church in Lakeway , Texas. A friend of his had dubbed it “Mermaid Jesus.” 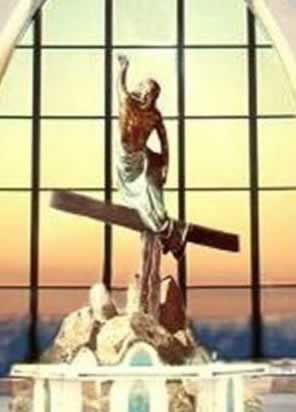 It is rather odd and it looks like the cross is slowly sinking into the ground and that Jesus had to climb on top to avoid touching the ground.

In my own diocese in the two parishes closest to me, at one time had only resurrection Jesus’. Sometime after our new Bishop was installed these figures were retrofitted. In one Church you can see the outline of the previous embedded cross underneath the newer crucifix. In the other Church I believe they added a crucified Jesus onto the previous one. When they moved into the newer church I carried the presider chair over to the new location. I was curious to see the interior of the new Church. I was not a happy camper. Besides the now mandatory olympic sized font, the tabernacle was was placed off to the side behind some columns. The tabernacle at that time looked like it was made of Bakelite and very plain in a 1920s Bakelite look. They have since replaced the tabernacle with one that was much more fitting. I am pretty sure that the Crucified figure of Christ was added later and is shown in the picture below.

The newer crucifix creeps me out. Jesus being crucified on Jesus seems strange. St. Paul said “I am Crucified with Christ.” In this case Christ is crucified with Christ. I normally don’t go to either of these parishes since they really lay the contemporary music on with guitars, electric bass, drums, tambourines, maracas; and of course neither Church has an organ. To me this is liturgy set on stun.

Attached to one of the previously mentioned parishes is a new school building. At the front of the building in large letters is 2001 C.E. I almost tripped when I saw that. A Church school building using Common Era (C.E.) instead of Anno Domini (A.D.) is just bizarre.

Maybe they should call it Pew-fume

It’s “Olympic Jesus makes a bad dive.” And underneath that its’ “Jesus is pregnant with Jesus???” HUH?

I really hate it when bad artists try to be creative. We have a church near here with a bad-looking Resurrection Jesus in it. It was done by some local guy who had no sense of proportion and I can’t describe it. Just suffice it to say, it’s impossible to meditate on the crucifixion with this thing. It doesn’t belong in public, let alone in Mass. They should just take it down and bury it and get a real one. I don’t think one of those renovation parts dealers would take it off their hands…..

Wow! That exact resurrection stature makes an appearance on my campus, outside our library. I guess it is a copy of a statue found on a stations of the cross on a mountainside somewhere. Anyway, we call it “lay-up Jesus.” Also, we have joked many times that the school would sell ad space rights to Jesus’ hand. So, you could have “Starbucks Jesus” or whatever.

Also, we have a distinguished lecture series at my school. The speakers are given minatures of this statue. In a yearbook, you can see Cardinal Arinze looking very disgusted or confused by his trophy. It’s classic.

That’s funny, Jason. Yes, it’s the same sort of pose. Sort of just going airborne, leaping at a frisbee or something like that.

The worst aspects of the thing, after the pose, are the facts that he’s not properly clad, and he’s horribly out of proportion with great big feet and hands, too many muscles and a small head and face. I can’t describe it but it’s very ugly. It looks like it is ugly on purpose. Some things from that era are.

The Emmaus one actually Can accurately be seen here: https://emmausparish.org
That was probably an early artistic rendering. At Emmaus we have the tabernacle to the side and it is following the church’s pointed arch and and limestone designs. We have a contemporary mass that rarely (if ever makes use of the organ. It isn’t hope the music is made but what music is made that matters the purpose of Mass is to worship God and to worship means to kneel before. So it isn’t what you get odour of it that matters. Incedentaly by the nature of what God does for us what we get out of it directly correlates to what we put in we are called to offer up or struggles and in return we are given grace to handle them. The music is a method of worship and DCYC events as well as the Steubenville conferences make use of these modern forms of music and the events are supported by (at least some of the) United States bishops.