Speaking of referees, here something I did some time back.

Have you ever been a Sunday morning quarterback during Mass where you critique and liturgical abuses or experimental oddities that you have observed. You just wish at times that somebody would step in and do something about what your are observing.Well we have some good news for you! Francis Cardinal Arinze the Prefect of the Congregation for Divine Worship and the Discipline of the Sacraments has introduced a new program that will surely have an effect. 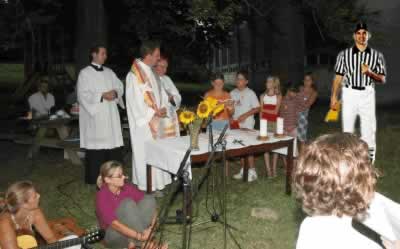 Applicants for Liturgical Referee should be well versed in Canon Law as applies to the liturgy, the GIRM and other liturgical documents, and a familiarity with any indults and permissions as set by the local bishop’s conference and the local ordinary. The applicant should also be physically fit so that he will be able to make all off the signals that might be required at a more experimental celebration of the liturgy. Applicants should be familiar with the following liturgical signals.

With the presence of the Liturgical Referee you can leave liturgical abuse spotting to the experts and spend your time instead trying to enter the Mass in prayer.

The Way of Distraction

Blogger's guide to what is not going to...

I am a Roman Catholic

LOL! I know several parishes that could use one of these guys. 😀

Nice start. How about using the penalty signal for Clipping — to counter the Foul of “Denying Holy Communion to a Kneeling Communicant”?

Great idea! Maybe this could be the secular order to the ‘Rubricians’ that Fr. Z keeps on dreaming about.

The presence alone of a such a liturgical official would increase my confidence with the local situation immensely. To quote Will Ferrell as Robert Goulet on the annual vh-1 Easter vigil special, “You wouldn’t let a clown fix a leak in your john…”

This is the funniest thing I’ve read in a while. I emailed the link to some friends.

I LOVE THIS IDEA!! Too funny..but so true….I guess that makes it kind of sad too…

That’s funny! Yet, it’s true. My old church could have used this-especially sign #1-“No Crucifix in the Sanctuary”

Man!! I want one of these guys at our parish!