Home News “Too much Facebook gets Nun banned from order”
News

Maria Jesus Galan had 600 Facebook friends. She liked to communicate with them, to spread good news.

However, her Facebook habit has lost her something very dear–her habit.

Galan, you see, spent 35 years inside the Santo Domingo el Real convent in Toledo, Spain. It’s an introspective place that doesn’t encourage its nuns to have too much contact with the outside world.
However, according to the Telegraph, the convent allowed a computer into its midst 10 years ago.
Sister Maria saw the future that this computer offered. She digitized the Dominican convent’s archives. The computer also offered more mundane assistance.

“It enabled us do things such as banking online and saved us having to make trips into the city,” she told the Telegraph. 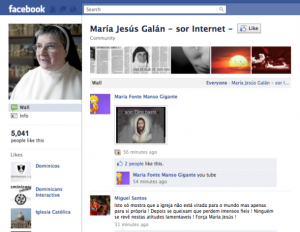 The local government even gave her a prize for her digital initiatives. Oh, but with the prize came the fame. She began to collect more friends on her Facebook page. It seems, though, that this made her enemies within her own walls.

Her fellow nuns reportedly claimed that Sister Maria’s Facebook activity “made life impossible.” She was therefore asked to leave and now lives with her mother.

The Dominican order has refused to comment on Sister Maria’s departure. However, her Facebook page is overflowing with sympathy. Some posters tell her that now that she has her freedom, she can travel to places like Australia. Some declare themselves sad that she was the victim of such an injustice. [Source]

The rest of the article is the old Church is out of touch with new technologies. The question here had nothing to do with social networking, but whether the hours of activity was interfering with her vocation as a nun or the charism of the order. We don’t know the details here to make a judgement of this on our own other than that the order certainly saw this as a problem. Though it has turned here friend count from 700 to more than 5,000 – so hopefully she will continue to evangelize and not whine about the situation.

There is going to be smell to pay...

Put those fries down and put your hands...

Most likely her problem was with obedience.

She would not have been sent away without being first asked to change whatever behavior was interfering with her vocation. The order does not make such decisions lightly. I don’t feel all that sorry for her.

Perhaps if this is something vital to her she may also consider a vocation to the daughters of st Paul. they have an active Facebook apostalate right now with their ask a catholic nun page.

My guess is that it is simple internet addiction. That would easily interfere with her duties, community life, prayer life, etc. I’ve seen it in other religious. This causes them to withdraw from common life, much as it would cause any person on the outside to isolate themselves. She needs our prayers and someone to help break her out of that compulsion.

As a religious on Facebook – with more than 600 “friends,” I will attest that EVERYTING in religious life is done with the blessing of obedience. As much as I enjoy social networking, if tomorrow my superior told me to deactivate… I would, without argument. Also, as a general rule, a religious isn’t asked to leave her community after a single act of disobedience — I am guessing there is more to the story that cannot be told, out of charity! God bless all involved.

Yes, well, there is something to be said for the simple life, and I do wonder if a life of contemplation is even compatible with the sound-byte culture of Facebook. Not to be completely Luddite, but we must recognize that there is inherent formation that occurs when using any form of communication, that is, form and matter are inseparable in modes of communication (via Neil Postman). Just as the television changed (in most cases for the worse) virtually every arena of public discourse, I think we have only seen the beginning of the havoc that Facebook, Twitter, and the like will wreak on human relationships and communication. This has been a particular concern of mine for quite some time.

I just wonder, if they are limiting their contact with the outside with the outside, why was she ever allowed the Facebook page to begin with? If it was seen as a problem, why didn’t her superior nip it in the bud?

Really, folks, why all of the anti-Catholicism on this blog? Why would an Order that is dying for new members summarily dismiss a veteran member unless the issue was grave? And no responsible Order is going to publish (or even talk about) its point-of-view in a disciplinary case, never, but especially when the issue is grave. And no dismissed member is likely going to air the Order’s point-of-view honestly in public either. I am a Dominican who has been a superior for many years. I do not know this specific monastery nor the individual nun in question, so I am free to speak here. I know the procedures. Canon Law itself insists that if a Religious is dismissed, it can only be the result of a long, studious process in which the person is fully made aware, orally and IN WRITING, on three separate occasions separated by sufficient time, of the problems perceived with him or her. The person has a right to canonical counsel. The burden of the request for dismissla rests with the Community, who must submit their decisons to Rome for approval. Rome looks into these matters carefully. The person has a right to an appeal if they feel they have been unjustly accused or judged of the serious problem(s) the order finds (and Rome) finds with them. Also, the Dominican order is so intent on increasing its internet/facebook, etc., presence, that they have priest assigned to supervise this duty at their headquarters in Rome! So it sounds as if there is a whole, whole, whole lot, and enormous lot of information about this case, information that is probably damaging to the image of this individual ex-nun that we do not know! And yet, some readers of this seemingly very Catholic blog, submit to the presumtopn of guilt toward the Church. That is anti-catholic activity and nothing short of it, even if you didn’t intend it. Good God, wake up! Isn’t our Church suffering enough already today? I suggest that all those guilty of this sin do penance, make reparation, and do no whining about it on this blog, although your words of repentance would certainly be a source of edification to the faithful. You know that I am right, so do the right thing.

To Contra: There were undoubtedly many steps attempted, especially since she was a nun in solemn (perpetual) vows. It is not a simple step to dismiss her. Although my guess is that she was “exclaustrated” (given a “leave of absence,” essentially).

Many monasteries have Facebook pages. It’s usually updated once a day or week or so. I email my various prayer partners in Dominican monasteries all the time as well. The Facebook page for her has all these messages saying that “The Church needs to modernize.” The “Church,” even monasteries, generally have no problem with technology. It’s when it interferes with common life and prayer that it has a problem.