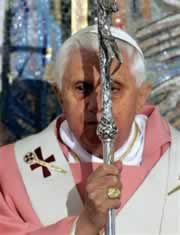 The 4th Sunday of Lent is also known as Laetare Sunday, but many people are unaware of the problems of many people on this Sunday in Lent. Some people especially men experience gastrointestinal upset and skin problems at the site of priests wearing apparently pink vestments. Telling them that these vestments are actually suppose to be Rose colored to rejoice in Christ’s redemption to look up and see the first rays of Easter is of no avail. Regardless of any efforts to explain why a Rose is appropriate they still see pink vestments. This condition is known as Laetare Intolerance and the sufferers are Laetare sensitive.

Unto now there was no help for those affected by Laetare Intolerance.

Introducing Vestmints made of pure organically grown herb mentha. Mint was originally used as a medicinal herb to treat stomach ache and nothing could be better for those who get queasy over apparently pink vestments. Laetare Intolerance does not have to change affect your active participation in the Mass, but you will be able to pray actively with the best of them.

Just take one tablet before the hour fast before Mass and you will not have any of those annoying feelings. You will soon "O be joyful" just as Laetare originally means.

Vestmints does not work for everybody in all situation without additional help. Some vestments worn are so pink that you think instantly of Pepto Bismal and wish you had some for your queasy stomach. That is why each bottle of Vestmints includes a coupon for a free set of Rose colored glasses. The use of Rose colored glasses with Vestmints is highly effective in these situations that otherwise could result in pink eye.

Even better news is that those who suffer with Laetare Intolerance also often suffer from Gaudette Intolerance on the third Sunday of Advent and Vestmints has been proven to work on both Sundays. Thus killing two Sundays with one pill.

Vestmints can also be used for other severe vestment allergic reactions such as to rainbow stoles, vestments out of the seventies, or ones approved by Archbishop Piero Marini.

Remember though to see your doctor first before taking Vestmints to ensure you have a vestment related illness. He will take a stole sample and can give you the results immediately.

So I guess Judas was unavailable

Edith Stein and Companions: On the Way to...

I had no idea that …

This could have worked well at St. Leo’s, just two blocks from me. The pastor wore violet today. Grrrrr! (not to mention the opening song was “Gather Us In” – blech!)
BMP

We didn’t have the fourescent pink vestments at our church today. The priest wore a purple chasuble overlayed with a heavily decorated stole of darker purple. The deacon wore a gray stole over a nice alb, and the altargirls wore matching tennis shoes with their jeans as well as the parish’s monastic albs.
The deacon’s homily was excellent.

You’re a hoot! I love it! Where can I order a month’s supply of Vestmints?

Does it work for ministers wearing shorts?