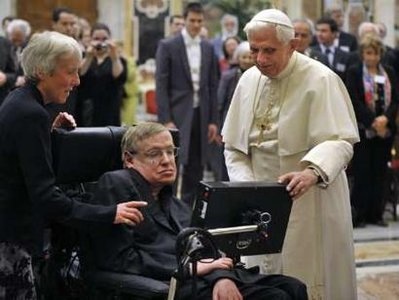 Pope Benedict XVI greets British professor Stephen Hawking during a meeting of scientists, theologians and philosophers at the Vatican today to discuss the origins of the cosmos.

VATICAN CITY (CNS) — The world did not emerge out of chaos; rather it was created intentionally by “the first being,” Pope Benedict XVI said.

The Creator also is involved not only with the origins of the universe, but continually sustains the development of life and the world, said the pope during an Oct. 31 audience with 80 participants of a Vatican-sponsored conference on evolution.

Scientists, philosophers and theologians from around the world were attending the Oct. 31-Nov. 4 plenary session on “Scientific Insights Into the Evolution of the Universe and of Life” at the Pontifical Academy of Sciences.

The pope said the topic was timely and has elicited interest worldwide.

“Questions concerning the relationship between science’s reading of the world and the reading offered by Christian revelation naturally arise,” he said. Popes Pius XII and John Paul II had found there was “no opposition between faith’s understanding of creation and the evidence of the empirical sciences,” he said.

“In order to develop and evolve, the world must first be, and thus have come from nothing into being. It must be created,” the pope said. 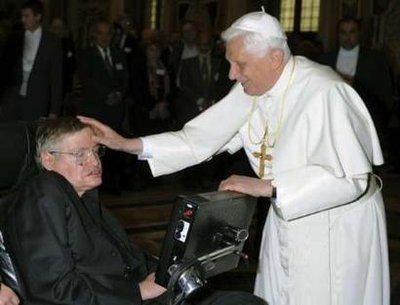 Via Fr. Blake and American Papist

Catholic song parody at it's best

Not exactly a dream prize

Returned to the Catholic faith

Professor Hawking is essentially a deist/agnostic-thinking God may have created the cosmos and then left it to its own devices. One article quotes him. “I believe the universe is governed by the laws of science,” (Hawking) said. “The laws may have been decreed by God, but God does not intervene to break the laws.”
I don’t know what he thinks of the church as a whole, but Hawking has been greatly influenced by St. Augustine’s philosophy of time(from the Confessions). It is rare to see an ancient philosopher quoted in a modern physics paper, but Hawking has done it with Augustine. Let us pray that he embraces the fullness of the truth Augustine revealed.

Wow. Stephen Hawking is so brilliant… and look at the suffering he’s endured physically. Amazing to see him here with the Holy Father.

Hawking was said to have misquoted what Pope John Paul II said in a 1981 Vatican conference on cosmology. Has that been sorted out?

Interesting meeting of the minds. Prof. Hawking is an admitted atheist, wonder if he having second thoughts.

We should pray for Hawking.

As a side note, he is my favorite person to refer to when speaking of those lost to abortion.

We should pray for Hawking.

As a side note, he is my favorite person to refer to when speaking of those lost to abortion.

It would be interesting to see who else was there….and who wasn’t.

Melody, I think you are right. We should pray for him.
Sometimes a person professes atheism because of unresolved anger directed at what they believe is God who they blame for certain hardships. But, the desire for the true God remains in the heart and studying the order of the universe can only lead to constant reminders that there is a God. Catholicism alone convincingly accounts for the goodness of God and the problem of evil and teaches how God Himself endures that evil for us in Christ.

I wonder how Harking felt receiving a blessing from the man who is the head of the Church he despises?

I dare say, this Holy Father is one man who has what it takes to meet this brilliant atheist head-on.

I love how good natured our Pope seems to be. He smiles so readily and never patronizing anyone.

Laura, since when did being an atheist mean the you despise the Church. If Hawkins despised the Church he would not have attended nor would he have received a blessing.

Wouldn’t it be wonderful if Hawking would receive some sort of healing as a result of this meeting?…