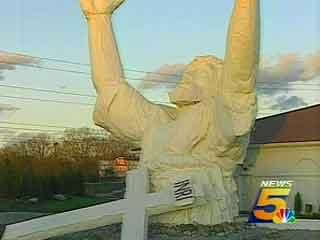 Image during constructon via roadsidearmerica.com

When motorists on I-75 see the 62-foot statue of Jesus alongside the highway, many have the same reaction, News 5’s Emily Longnecker reports.

"It just makes you, it’s like ‘Wow,’ " said Stephanie Nevels of Fairfield.

Tiffany Williams has been hearing about the statue since it was put up outside Solid Rock Church.

"It kind of took my breath away. I was just like, ‘Oh my goodness,’ " Williams said. "I had no idea it would be that big."

The giant messiah is gaining giant attention from newspapers and magazines across the country. One travel website calls it "Super Savior."

Church officials say the styrofoam and fiberglass Jesus is the largest one in America. And people are flocking to see it, says Mike Trent, who works at the BP gas station down the street. [Source]

My impression of this statue is "quick throw me a rope! I am drowning in quickgrass." I also think it is pretty ironic that "Solid Rock" church would build a hollow Jesus statue out of styrofoam and fiberglass. Though, after all the abstract Jesus statues – in comparison – this one is not too bad.

Catholic and Taking a Break

For Holy Days of Obligation

Seminarians in the Third Millennium

What if the Church was an opensource software...

I’m trying to connect the arms outstretched (upwards) pose, especially with the cross in front, with an appropriate biblical verse that describes it. I can’t do it. Anyone else know where they might have gotten the idea for this particular pose?

“From out of the depths…” would be a good Scripture.

Gee, Jeff, you beat me to it! I’m traveling over the holiday weekend and won’t be back to St. Meinrad til tonight, so I haven’t had a chance to upload from my cell phone camera the picture I snapped of that freakish Jesus as I drove past it on Wednesday. I was looking forward to surprising the blog community with my photo. Now I’ll just look like I’m copying Curt Jester. Oh well.

It also reminds me of a grown Jesus in a Divino Nino pose.

I drive by this statue roughly once a week. We commented that in the big windstorm, wouldn’t it be interesting if the headline read: “Novices Killed by Hand of Angry God!”

We live in the area and go by it frequently. My wife’s boss calls it “Touchdown Jesus.”

When completed,it will be coming out of a large pond that will be used for full immersion baptism. I suppose it is supposed to look like Jesus emerging from the Jordan after being baptized.

Hmmm, funny that statues at a Catholic Church is idolatry. Although its hard to find a statue at some Catholic churches nowadays.