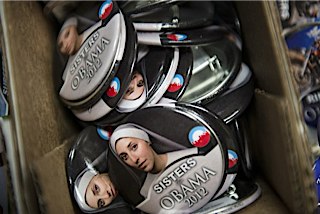 ‘Sisters for Obama’ ( Brendan Smialowski / AFP / Getty Images / January 13, 2013 ) A pin with a nun on it is seen at the official Presidential Inaugural Committee’s gift shop in Washington, D.C.

Funny how they selected a young nun in a habit to represent “Sisters for Obama.” The majority of women religious who support President Obama wouldn’t be caught dead in a habit and skew towards a much older demographic. Maybe a more accurate depiction would have been confused with the “AARP for Obama” buttons.

Plus what is up with that Obama logo on the buttons? It looks like a sea of blood which of course would be highly appropriate.

The “what could go wrong” phase

iPhone apps that remind you to pray

Well this is much better than donuts afterwards

Don't let the Pope see these

Good point, a senior citizen in a pantsuit would be more accurate.

You are probably right, they did this because they realized that if they showed what the actual supporters who are sisters look like it would be confused with the “AARP of Obama” gang as you suggested.

Well, the previous logo looked a little too much like the old Pepsi logo, so I guess a sea of blood is an improvement. At least this version won’t make you thirsty.

Jeff! You and everyone on the internet have got to stop picking on “Old Bomb of Ma” cause she might just explode on ya some day. You Americans are lucky that your ancestors knew what they were doing when they made sure that no American “MAN”, I mean “WoMAN”,,,no, no, I mean your good folkly ancestors. WHATEVER VICTOR! BUTT “I’M” not finished yet…. As “I” was about to say, Bill Clinton should still be your president right NOW? I mean if your so called silly past ancestors would have accepted that there’s nothing wrong with a little blow drying if ya know what “I” mean cause the witches and bitches allow “IT” all the time and not just for eat years and if they have their WAY, “IT” will be put into your new UP Coming Constipation, no, no, I mean new Constitution that the alien gods will be bringing in when they take over this baby milk galaxy. Hey come on folks lighten UP cause Victor gives each and every “ONE” of his hair a good blow job every morning after the holy spirit showers him with his love and his heavenly father knows every “ONE” of them so………..

So much for sinner vic folks but this butt of his has got to get off my trone cause “IT” doesn’t seem to want to do his job any more. 🙂

Not funny Victor cause we don’t make fun of your jesus that way. Do we NOW? 🙁