Home Politics What in the world?
Politics

What in the world? 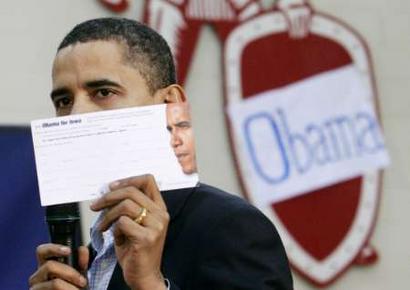 I wonder how in the world anybody at a Catholic High School would think it would be a good idea to rent out their gymnasium for a Sen. Obama campaign stop. But Newman Catholic High School in Mason City, Iowa must have thought so. Here is a senator as pro-abortion as they come who as a state senator did what he could to block a Illinois state version of the born alive infants act. He voted to block the partial birth abortion ban and is in favor of embryonic stem-cell research. He is also in favor of homosexual marriage. So you have a Senator in favor of not only abortion but infanticide once the child is born and yet he is allowed to boost his campaign at a Catholic High School.

Though I am also not in favor of any candidates at any level of office speaking either in Catholic churches or Catholic schools.

As a side note I do wonder what the Obama banner covers up on the knight’s shield and especially wonder if it might be a cross?

In this house of Brede

What I really meant to say was

Shabbiest Catholic in the history of the modern...

“Grave assault upon both religious liberty and marriage”

Post-birth abortion? He sounds like a candidate even I could support.

What diocese is this travesty taking place in?

I found the information. It is the diocese of Debuque.

Was this a school-sponsored event or an Obama event held at the school? There is a difference. Although I can understand why the diocese would not want Obama to use the school for an event, it may legally have to allow it if it has a policy of allowing campaigns to rent space for non-school sponsored events.

In other words, if the school allows any campaign to use the space for an event, filming a commercial, or something like that, it has to allow all other campaigns the same access at the same price. Any denial or difference in the fees charged would be considered an illegal form of support/opposition by the IRS.

A school-sponsored event, however, is another story altogether.

I just bring this up because I have seen the situation elsewhere.

My favorite Obama quote “Too many of our men are abandoning their children at conception”. This was at a conference of baptist ministers. So that I’m clear on his stance, abandoning bad-murdering good.
It’s so embarrassing that Illinois is putting out pro-death candidates.

“Mason” City, eh? Speaks to the likely influence of that K of C… bah

It is in the Archdiocese of Dubuque. I was raised in that diocese and it fell to the hands of liberals decades ago. Jerome Hanus is the Bishop..He is totally and completely out to lunch and I have to consider him a gumbleton type of guy. The Chancery is run by a bunch of middle ages grey haird feminists. I have many family members who belong to this diocese. The diocese has churches that are absolutely FULL of zombies in the pews who likely dont even realize there is a pope.

I’m originally from Mason City but attended the public high school. It’s true there are lot of feminists running things in that diocese but the Bishop isn’t completely out to lunch. I attended his spirited address to the Iowa house denouncing the stem cell bill earlier this year. They passed it anyway but he argued against it. Dubuque is a very Democractic friendly area, Mason City not as much. I’m not really sure the motive of the administration but I emailed to ask.

I believe it was Bishop Sheen that said, “Better to send you kids to public school where they’ll have to fight for the faith, than Catholic school were it will be stolen from them.”

I received this response from the principal of Newman Catholic. I believe we should accept Mr. Adams apology, Merry Christmas.

On Wednesday, December 26, Senator Barrack Obama’s presidential campaign rented the gym at Newman Catholic High School. Therequest had come on the previous Friday; in the rush of Christmas activities, I failed to consult with Archdiocesanofficials and I misinterpreted Archdiocesan policy, for which I take full responsibility. My action violated Archdiocesanpolicy. I apologize to the Newman community and to the Archdiocese for allowing this event to take place at Newman CatholicHigh School. I wish to stress that neither the Newman Catholic Schools System nor the Archdiocese of Dubuque endorses anypolitical candidate for president or any elected office. Tony AdamsK-12 AdministratorNewman Catholic School He who dares to teach must never cease to learn.

“”Mason” City, eh? Speaks to the likely influence of that K of C… bah”

Pardon? Are you accusing the Knights of Columbus of being pro-abortion, or masons? Please clarify, because I’d love to hear you justify either.

Wow…I need to ask my Newman friends about this. I went to Mason City High School, but I think I still would have heard about this.