A reader sent me a sample of how New Line Cinema is deceptively using a review from the USSCB’s Office for Film & Broadcasting. 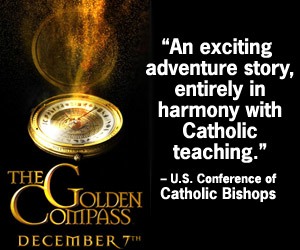 First it is dishonest to say that it is the USSCB that said this, but that is the least of the problem.

The part they put in quotes does not actually exist in the review. They have cobbled it together from two different sections of the review.

Whatever author Pullman’s putative motives in writing the story, writer-director Chris Weitz’s film, taken purely on its own cinematic terms, can be viewed as an exciting adventure story with, at its core, a traditional struggle between good and evil, and a generalized rejection of authoritarianism.

To the extent, moreover, that Lyra and her allies are taking a stand on behalf of free will in opposition to the coercive force of the Magisterium, they are of course acting entirely in harmony with Catholic teaching.

They didn’t even do a Maureen Down and put in ellipses.

I sent off some emails to New Line Cinema’s Press Contacts, though I doubt if I will get a reply.

Though I also do wonder how non-Catholics might see the endorsement and if if it a negative in their case?

Update: New Line Cinema emailed me back with this reply “We have been alerted yesterday about this matter and we have changed the text — it takes 24 hours for the online change and it will happen sometime today –.” So if anybody sees the new text of the ad let me know what it is.

Who has the the worst chasuble?

"Faster than government spending. More powerful and with...

An astute and generous ruler

Who you gonna call?

New Line is hedging their bets. The film was not good enough for a summer release, so they decided it would open during the second-biggest movie season which is yipes! Christmas.

Somebody in their studio was not thinking about that one. Either that, or they were suckered into endorsing a book series they knew nothing about.

There are too many problems with the books, not the least of which is that the second and third installments are nowhere near as good as the first installment in terms of story-telling and adventure.

The other problems have less to do with style and more to do with substance. The movie is PG-13 and simply stated it is not really children’s fare. There are far too many decent kid-friendly shows coming out these days for Compass to have impact.

The reality is, the books themselves, though supposedly geared towards “children” did not sell well at all in that category. That children would read them was the stated intention of the author. But they did not. The books were read mainly by disaffected teenagers and college students wanting something more in the lines of Ayn Rand.

And if the books are doing poorly, then expect the movie to do worse. If DaVinci Code has taught us anything, it is that Americans are far more sophisticated watchers than readers.

Much is to our shame.

But I predict a two-week run for Compass.

The endorsement makes it sound like a pamphlet for Natural Family Planning.

If I wanted people to stay away from my movie in droves, I’d be sure to tell them it was entirely in harmony with Catholic teaching.

This is completely in keeping with how movie advertisements quote from movie reviews, and attribute the quote to the organ publishing the review.

A review in the NYT that states, “the only outstanding thing about this film is that they had the chutzpah to release it at all” might easy be quoted as:

The shame is that the reviewer said what he said, not that they quoted him.

What I’ll be interested in seeing is whether the USCCB takes them to task for the misquotation. Probably not.
.

Maybe the best course of action is to ignore the film and its promotion, after all. 🙂

“Maybe the best course of action is to ignore the film and its promotion, after all. :)”

Yup. An while we’re at it, if we see a supermarket advertising obvious poison masked as cookies, we should not say anything because to do so will make some people want to eat it all the more.

Or, if we should learn that terrorists are leaving bombs disguised as toys on playgrounds, it would be counterproductive to warn anyone. Of course that will make certain suicidal children run right out to pick them up.

“They didn’t even do a Maureen Down and put in eclipses”.

‘Eclipses’ would be great, so that no one would be able to see anything!! But I think the word you’re looking for here is “ellipses”. Still, the subconscious reference is very apropos!

It is utterly idiotic that the USCCB wastes time and money to review movies at all.

Uh, besides ‘ellipses’ I think the writer means Maureen DOWD, rather than Down.

Either way, Christians in general and Catholics in particular shouldn’t be afraid to voice their concerns and disapproval of ‘entertainment’ that distorts the faith and spreads lies about our Lord. We don’t have to act like extremist Moslems, but we don’t have to roll over and yawn either.

But silence implies complicity. And don’t forget the Act of Mercy to “educate the ignorant.”

New Lie, er, New Line, it seems is doing a strategy lately becoming so common in the film industry:

-Make a film that’s sure to offend a group, i.e. Christians.
-Make sure the protesters get really offended to the point that they will do protests and rallies to generate free publicity for said film.

The ad is breathtaking in its audacity and mendaciousness. And the USSCCB reviewer should be replaced.

The USCCB reviewer should be replaced for writing the most boring and useless film reviews I’ve ever seen.

But this remeinds me of when my diocese had a series of “town hall”-type sessions when I was a teenager, and one of my contributions to my neighborhood meeting was demanding that “we need to get rid of all this liberation theology and social gospel stuff.”

Well, to my surprise, my comment made it into my parish’s report to the diocese.

It appeared as “we need . . . liberation theology and social gospel.”

I hope Stubble spark is right.

I’m with you about the USCCB movie reviews. They tell me nothing – or next to nothing as they can be so misleading.

Of course, my rule is to ignore 90 – 95% of all the current Hollywood movies anyway. If a good one comes out, I’m sure I’ll hear about it – though not from a USCCB movie review.

Did you report this to the Catholic League? I’m sure they could do something about this blatant lie.

Vince,
I meant that if it is not a well-crafted film, it will die a natural death. Unless we do its advertising for the producers, etc. by screaming about it. So, the question for me is “Is this a dud, or not?”
I WAS screaming about it before I read here that it was not a good film. If I need not bother, that’d be fine with me. There are enough REAL reasons to raise our voices and, especially, offer our prayers.
Is there a trustworthy reviewer out there?

What Paul said. QOOC has been standard movie advertising practice since long before my father, may he rest in peace and so may we, was kicked up stairs to attempt to run the MPAA “Advertising Code” (which, of course, made him an evial “censor”.)

And remember, it was Maureen Dowd who inadvertently gave Catholic traditionalists the slogan “The cafeteria is closed!”