Home Other St. Coltrane
Other

From Ecumemical Insanity via Relapsed Catholic

An Episcopal church in San Francisco has redecorated in a rather unusual way. According to the diocesan newsletter:

St. Gregory, the fourth century bishop of Nyssa, extolled use of the dance in worship. Today, the San Francisco congregation that bears his name incorporates dance in its liturgies, while two rows of saints that surround them are � not surprisingly � permanently caught mid step in what looks like the same Tripudium, danced by worshippers below. 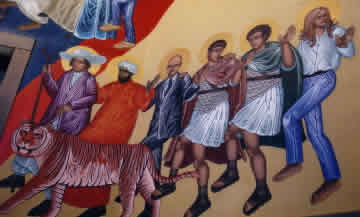 Kind of a holy Can Can I guess. Speaking of the Can Can, check out this page of Cows doing the Can Can.

Sure I will stay with you one hour...

The sun sets on a 26 year papacy

Another blogger (pretty sure it was Fr. Bryce) wrote about this church and their use of liturgical dance in his original blog back in 2002. He also asked for other suggested people to put on the mural. I don’t think it’s available any more. It was one of the funniest things I’ve ever seen.

I understand you were listed in Commonweal’s report of St. Blog’s Parishes.

Looks like a scene from a family member’s recent wedding reception I was fortunate(?) enough to attend. That dude on the end in the long hair and jeans looks like the bride’s brother!

I couldn’t sit in a church with a fresco like that without snickering a lot.

Maybe the church should adopt the slogan: “What if the Hokey-Pokey really is what it’s all about?”