One of the developments of the last two Presidential Administrations has been the use of Religious Sisters to support their goals.

President Barack Obama said that the Affordable Care Act—AKA Obamacare—would not have been enacted had it not been for Sister Carol Keehan. She was at the signing center for the “Affordable Care Act” and was given the pen the President used to sign the bill. She did not hold out for the traditional 30 pieces of silver. 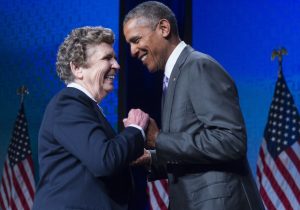 That love did not apply to the Little Sisters of the Poor or other religious groups as the so-called “Contraception Mandate” was forced on them where multiple accommodations led to no real accommodation and only to the courts where this is still not resolved.

Recently on May 4th.

President Donald Trump invited members of the Little Sisters of the Poor on stage ahead of his signing of a religious liberty executive order Thursday.

“We know, all too well, the attacks against the Little Sisters of the Poor,” Trump said, “Incredible nuns who care for the sick, the elderly and the forgotten.”

So finally the problems the Little Sisters of the Poor had has been resolved. Well not really. The Executive Order is weak sauce and the problem should have been taken care of at HHS where the “Contraception Mandate” was created as an interpretation of ACA.

So again we have Nun Props for a President to use. (Yeah I know their Sisters, but Nun Props flows better). I felt embarrassed for the Little Sisters of the Poor being used for a photo op. Time will tell if the actual problem gets fixed, but so far President Trump seems to like the idea of appearing to want to protect Religious Freedom over actually doing something. Yeah typical politician.

Judge when I tell you to judge

We need yet more contraceptives

Not about the cures in the first place