Things you wished were just photoshopped 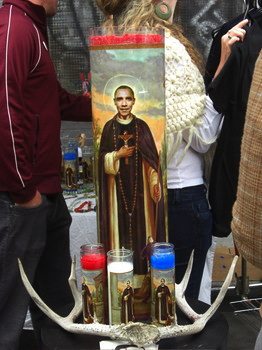 Though maybe you could use them for a Novena to pray he doesn’t win.

Update: As some readers have suggested and judging by the style of habit used maybe this is just St. Martin de Porres. There are similar images of this saint clothed like this one. Pictures of this saint usually include him holding a broom and if you enlarge this image that seems to be what he is holding. So probably just a coincidence that the face is very Sen. Obama like.

The Church is not WalMart

Unelectable – I hope so

Sure, I can pray for you

Things are back to normal

I have the same image of St. Martin on a holy card. The face is the only difference, though there is a slight resemblance which may have lead someone to replace it with Obama’s.

May the real St. Martin hit him over the head and knock some sense into him!

Someone replaced St. Martin’s face with Obama’s, no doubt. This is so very disturbing.

Beat me to the punch. I was thinking the same thing.

That must be a modified image: Obama as St. Martin de Porres? Have his supporters even heard of St. Martin?

This is wrong on so many levels.

Great. Make even more people think Obama is an acceptable choice for a Catholic voters by making him APPEAR to be Catholic.

This is it, the end of the world. They do often say that the beast will be a political and religious leader.

At least they didn’t style him after Christ. At the least.

I think it is just St. Martin de Porres. Of course, maybe there’s some context that I’m missing, but I think it looks more like my St. Martin statue than Obama.

I did a google search for St. Martin de Porres and found a similar image, but maybe someone photo shopped Obama’s head onto the dear Saint’s body.

are two of the images I found, so St. Martin de Porres’ face doesn’t look the same in each, but it is very similar to the image above.

The image obviously plays off of this one. The face in no way carries any resemblance to Obama.

Notice also that what we’re looking at is bigger than the real, standard candles below it. Another hint, for me, that it is Photoshopped.

I don’t often read into such things so much, but a thought struck me, maybe this is no coincidence. Of course the disrespectful manipulation of St. Martin’s image is shameful, but maybe some good can come of it? Perhapes this act can backfire a thousand fold on those who have committed it? Besides the irony of a Catholic miracle comming out of San Francisco would only be fair to St. Francis, he’s due.

Maybe the time is now that we all appeal in a special way to St. Martin de Porres, maybe he will be the Heavenly “Joe the Plumber”, maybe his prayers will be the true October surpise?

Is there any sort of Novena to St. Martin that Catholics maybe ought to pray in the days leading up to the election?

It could be too wildly optimistic to suggest but perhapes such a thing could “turn the tide” away from the US electing the most pro-choice candidate ever, or maybe (and wow wouldn’t this be a miracle) help Obama to have a change of heart on the life issues?

According to wikipedia anyway, St. Martin de Porres is the patron saint of people of mixed race, Obama’s patron. I don’t think St. Martin makes it into our prayers nearly as often as St. Francis, St. Anthony, St. Patrick, etc. but maybe it is his time!

I’m a Dominican and a member of St Martin de Porres Province, USA…this is St Martin’s body/habit and That One’s face. St Martin is spinning in his grave…get ready, folks, it’s gonna be a long four/eight years.

Yes, the body is St. Martin de Porres-but certainly not the face!

I’m with Amy-the real St. Martin ought to hit Obama alongside the head!

Sick, really sick… and fascinating! To do a surgical dissection of rationalizations used by “Catholics”, to vote for the infanticide candidate.

Saint Martin de Porres,
your concern and charity embraced
not only your needy brethren,
but also the animals of the field.
You are a splendid example of charity;
we thank and praise you.
From above,
hear the requests of your needy brethern.

By modelling our lives after yours,
and imitating your virtues,
may we live content knowing that
God has looked favourably upon us.
Because this is so,
we can accept our burdens
with strength and courage
in order to follow
in the footsteps of our Lord
and the Blessed Mother.

May we reach the Kingdom of Heaven
through the intercession of our Lord Jesus Christ.

Don’t give up yet, the election’s not over. This link is to a great website outlining the case against Obama, with video clips of him stating his positions:

Are you kidding me? So your vicious words suggest Mr Obama personally kills infants? More hateful hate speech from the far fringe right.

If you cannot do this, you are either #1. a Collaborator or #2. You are lying and one who merely spreads hate speech.

Please send me the names of Jews Hitler killed personally, if not you can never say Hitler was responsible for killing Jews. If you vote to
allow someone to die you are complicit even if you did not kill them personally.

The truth is Obama voted against a bill identical down to every single word as the one the one that passed the Senate 98-0. He voted to allow infants that supported abortion to be left to die with no care just so that he could protect abortion and make sure that abortion could not be limited in any way. The Illinois BAIFA wold not have
affected abortion in the state at all, yet he voted against it 4 times. That is support of infanticide.

He lied repeatedly that he never signed a bill identical to the Senate’s bill and still does so today. He accused the NRLC of lying
about this, yet his staff apologized the next day. Though he has continued to make this claim even during the debate.

What a horrible thought to compare Mr Obama to Hitler! Truly the far fringe right has no shame.

Mr Obama thinks abortion should be safe, rare, and legal.

Those on the far fringe right think abortion should be unsafe, plentiful, and illegal.

Now you tell me who is really pro life?

With 48 million abortions in the U.S. alone we have made Hitler look like an amateur.

He will get rid of the Mexico City policy and allow federal funding of abortion which will increase abortion.

He will appoint Supreme Court Judges who will keep legalize murder as the law of the land.

Pro-life? Under Obama I would rather be in the most dangerous part of Iraq then to be a child in the womb.

Archbishop Chaput rightly called him the most committed abortion-rights candidate from a major party in 35 years” You can’t be both pro-abortion and pro-life.

How can you say such things my friend? You are saying the US is worse than Hitler? What an insult to my people! If you feel this way, why not leave this country my friend? Would you have stayed in Nazi Germany? I wouldn’t!

I am not familiar with Archbishop Chaput. I do not know if he is affiliated with the Episcopalian Church or not. But either way you have distorted the Church’s teachings on abortion horribly. This Archbishop should not blur the lines between church and state so dangerously. Presiding Bishop Katharine Jefferts Schori should condemn this strongly.

Putting that aside, you forget that Mr Obama will protect the lives of all living and breathing people in all phases of actual life. Yes, that and only that is being pro life. It has been scientifically proven that a first term abortion is no different than having a boil lanced or a tumor removed. These masses are each composed of living cells. But they do not breathe nor are they viable outside of the body they leach off of in any way.

I would urge you and your readers to consider voting for Mr Obama after further research at his website on this issue. Yes, you can!

I sorry to be the one to tell you this Mr. Zuckerman, but you have been visiting a CATHOLIC blog, not an Episcopalian one.

This is the Catholic Church you are preaching at, members of the Church that has been unchangingly opposed to abortion since its founding by the Son of God almost 2,000 years ago, no matter what Mr. Biden or Ms. Pelosi mistakenly claim.

Pay no attention to Jeff, Mr. Zuckerman. He’s just a hate-filled hater filled with hate speech for those hateful people he hates.

“Mr Obama will protect the lives of all living and breathing people in all phases of actual life. Yes, that and only that is being pro life. It has been scientifically proven that a first term abortion is no different than having a boil lanced or a tumor removed. These masses are each composed of living cells. But they do not breathe nor are they viable outside of the body they leach off of in any way.”
Mr. Zuckerman, I am sorry to say so, but you have either failed to do your homework, or you are suffering from some sort of insanity. (Hopefully temporary). Tumors do not have brains, beating hearts, fingerprints, hands & feet, etc.
You were at an embryonic stage of your life and then a fetal stage, too, before you were born. Never were you a leach. The unborn child is as human as you were, and far more innocent than you are now.
You know these things. Why do you deny them? Why do you insist on spreading the lie that the youngest persons among us are less than human? Is the election of Obama worth so much to you that you would deny life to millions of unborn children? Obama is not worth the murder of one unborn child, and neither are any of the rest of us.

I took this picture and it was not photoshopped or altered in any way. Mark Steyn at National review has my one and only e-mailing of the link to it, and I gave him permission to distribute it.