Home News And he took a World Cup, and when he had given thanks
News

And he took a World Cup, and when he had given thanks

A Nottingham priest is hoping to draw football fanatics into church by creating his own World Cup chapel.

Father David Cain has decorated the parish centre at St Barnabas’ Cathedral with flags of nations competing in the World Cup.

Fans will be allowed to come into the Roman Catholic church and pray for their team during the tournament.

Father Cain also hopes the display will encourage different nationalities to join together.

He said: "Understandably, many people will be fiercely cheering on their own nation.

"I believe sport, and football in particular can provide a great bridge in promoting harmony between nations despite differences that exist in race, religion or politics."

He said the late Cardinal Hume was a big supporter of Newcastle United and Pope John Paul II was a keen footballer and goalkeeper in his younger days.

Father Cain said the main places where people engage in communal singing are in church or on the terraces. 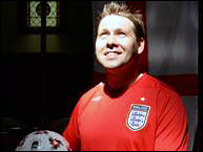 Father Cain will be praying for all teams during the tournament

Saints and Social Justice: A Guide to Changing...

"Holy Father, we are in line because you...

The Rolling Stones defy the Pope

Is this a decendant of Cain of the Genesis?

(if he is a protestant, then I hope he…)

No, he’s solidly Catholic. Just a bit fanatical about football. 😉