Via Dev Thakur of Christ the Physician, have mercy on us 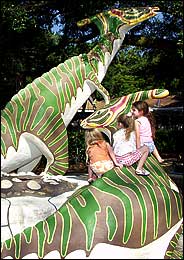 PENSACOLA, Fla., April 29 � Robert and Sch�n Passmore took their children to Disney World last fall and left bitterly disappointed. As Christians who reject evolutionary theory, the family scoffed at the park’s dinosaur attractions, which date the apatosaurus, brachiosaurus and the like to prehistoric times.

“My kids kept recognizing flaws in the presentation,” said Mrs. Passmore, of Jackson, Ala. “You know � the whole `millions of years ago dinosaurs ruled the earth’ thing.”

So this week, the Passmores sought out a lower-profile Florida attraction: Dinosaur Adventure Land, a creationist theme park and museum here that beckons children to “find out the truth about dinosaurs” with games that roll science and religion into one big funfest with the message that Genesis, not science, tells the real story of the creation.

Kent Hovind, the minister who opened the park in 2001, said his aim was to spread the message of creationism through a fixture of mainstream America � the theme park � instead of pleading its case at academic conferences and in courtrooms.
[Full Story]

I don’t think I have ever posted anything about creationists on this blog. On my path into the Church I saw myself as an young earth creationist where the universe had been around for less than 10,000 years and everything was created in exactly seven days. Going from atheism into Christianity and reading the Bible for the first time I assumed everything had to be literal if you were going to be a believer. Protestant radio with all of the creation updates also influenced me along this path especially the Institute for Creation Research and their web site.

I am still a creationist in the sense that God did create the universe though I no longer require a literalistic interpretation of Genesis. However God did it and whatever the time frame was, it is fine with me. I tend towards the view of Michael Behe author of Darwin’s Black Box: The Biochemical Challenge To Evolution and other proponents of Intelligent Design.

Here is a good article from Catholic Answers about what positions are acceptable to Catholic Belief.

Gift from on "high"

Kim Jong-il must need a hug

One of those new "Conservative" Cardinals

Yes! Absolutely! Everything that has ever existed was made by God, as God intended it to be; it existed as long as He directed; when it passed out of existence it sometimes left traces for us to find, to marvel at His boundless creation. To acknowledge that it might have happened over many millions rather than a few thousands of years does not detract one iota from the wonder of divine creation. For the past twenty years I’ve worn myself out trying to explain this to people, and with very little to show for my efforts. Thank you, Jeff.