(CNSNews.com) – Environmental activists are warning church-goers that Palm Sunday services are not compatible with ”   environmental sustainability.”

The Commission for Environmental Cooperation and the Rainforest Alliance put out a press release on Friday, reminding Christians about the “unsustainable practices often used to harvest the 30 million chamaedorea palm fronds delivered to Canadian and U.S. Churches” for Palm Sunday services.

Most of those palm fronds are harvested in Mexico and Guatemala, and according to the environmental groups, Palm Sunday services account for almost 10 percent of total palm sales in the U.S.

“Unfortunately,” the environmental activists said, “Peasant workers often harvest the entire plant, leading to the over-harvesting of the species, the potential destruction of rain forests, and the depletion of many bird species that migrate to these regions in the winter.”
[Full Story]

Boston � “The Cow Pope”�a 10-foot-tall statue of a cow dressed as a pope, wearing a sash that reads, “Blessed Are the Merciful. GoVeg.com,” and seated in its own “popemobile”� will be unveiled by PETA in Boston on Palm Sunday. The Cow Pope, created by award-winning Texas artist Greg Metz, holds in his hoof a staff decorated with a cow on a crucifix to remind Catholics that few activities contribute more to suffering�both for animals and humans�than eating meat:
[Full Story] 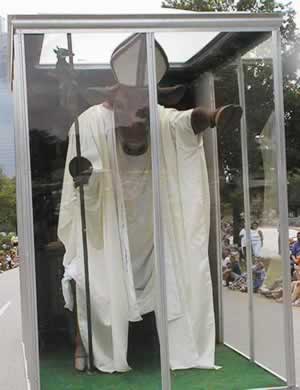 The Church of St. Gerard in Brooklyn Park is celebrating its �Got Lent?� Lenten campaign to remind residents about the Lent and Easter seasons and to draw new members to its parish, 9600 Regent Ave. N.

The campaign offers a light-hearted and positive invitation to residents in area communities. The goal is to draw positive attention to being Catholic through humor and teaching.

Lenten season began Ash Wednesday, Feb. 25, and continues through Easter, April 11. St. Gerard was founded in 1970 in what was at the time a cornfield. The modern Catholic church is lead by Franciscan Friars.
[Full Story]

Fetal Personhood Law Has Radical Implications for Freedom of Religion

Choosing between your faith and a leadership conference

Statement from the Archdiocese of Washington

Should we refer to these people as “palm-huggers”? I like the ominous warning of “potential destruction” – it hasn’t happened yet and we can’t point to it, but it could!?!

God forbid that Mexicans and Guatemalans can make a few $$ on some fronds. If Palm Sunday only accounts for 10%, I wonder what the rest are used for: flower shops, crafts? Maybe the palm-huggers need to crack down on those scofflaws.

PETA antics like these have the opposite effect from what they intend. Rather than promote the notion that humans and animals are alike, they make people realize how fundamentally different they really are.

“Metz also used his art in a religious context to expose violence against animals when he toured Europe in 2002 with his controversial creation ‘The Diner’�a 27-foot-long exhibit that parodied the Last Supper by supplanting Jesus� 12 guests with George Bernard Shaw, Einstein, Gandhi, and other famous vegetarians.”

Unfortunately, Jesus wasn’t a vegetarian, let alone vegan, at all. Perhaps He should be replaced in the picture with another famous vegetarian. Hitler, perhaps.

I wonder if the “social justice issues only” priest at our parish will scold us for having palms because the workers aren’t paid a living wage. I sure hope they are.

Hmm, this is a quiz obviously.

(Victor puts left hand on right elbow, strokes his chin with his right hand, and furrows his brow)

Hmmmm … I’m … guessing … that the REAL item is #3 and the other two are Curt Jester Satirical Hijinks.

I have a friend who, the last time PETA pulled one of their tricks, went out and ate 10 different species and emailed them pics and all. Felt a bit queasy the next day, though. Will have to remind him to fire up the grill.

This reminds me of when I was in college and some tree hugging person tsked at my use of wooden chopsticks in the cafe on Oriental food night. I proceeded to get out my calculator and figure up how many chopsticks could be produced from one tree. It was not pretty but at least she left me alone.