Home Other CPO Miller
Other

Being that tomorrow is my 15th anniversary of my becoming a Navy Chief (once a Chief always a Chief) I thought I would share the experience with my readers. It is not something one easily forgets. In the Navy advancement up to E-6 (First Class Petty Officer) is based on command recommendation, eval and award points, and the test score from a test taken on your field. If you get a high enough score depending on the cutoff that year you are advanced. Chief (E-7) has the previous qualification plus a review board looks at the records of those who passed. Each rating will promote a specified number of chiefs and the review board determines who makes the cut. I usually did well on the rating tests and advanced up to E-6 by getting promoted the first time around. I doubted though that I would ever make Chief. Being that I am rather shy and somewhat of a joker. The command you are in will rate all of the First Classes they have on their eval and their is a dimension of how well you are thought of by the officers and chiefs in your command to who gets ranked number one on down. Even in the Navy I was a computer geek and was normally assigned to do programming or database/word processing work staring with the old IBM XT with floppy drives. Not exactly the best way to show your leadership abilities. Luckily I worked for some officers that that thought those geeky skills and how I performed them were worthy to go up against some real hard chargers and actual leaders. 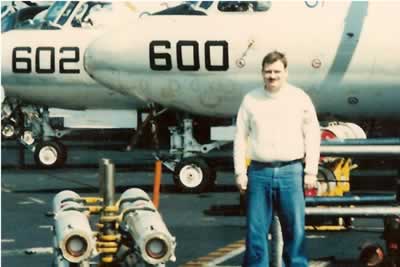 I will never forget the day myself and four others were called into the Captain’s office. My first thought was that I had really screwed something up and was being called to the floor. But seeing the other first classes around me and almost all of them had been "Sailor of the Year" I knew it must be something else. When the Captain told us that we had been selected as Chief Petty Officer’s I was pretty surprised to say the least. I could hardly wait to go tell my wife the news.

Leading up to the actual day you get the anchors pinned on you, you must first go through Chief’s initiation or in other word’s hazing. The first thing that happens is that you put together a charge book that you have to carry with you everywhere you go. In the charge book is written on each page a name of a Chief, Senior Chief, and Master Chief in order of seniority for in this case the whole base which was Patuxent River, Md. Being that I was in an electronic rate they had me number my pages in hexadecimal. You must get each page signed by the person’s whose name is on it. When I was on a ship I remembered seeing Chief selectees carrying their charge book proudly and thought about how cool it would be to one day be able to do the same. Of course selectees get harassed by Chiefs, but they are usually not many in a command. The command I was in at the time the Naval Aviation Maintenance Office (NAMO) was really top heavy with around a 150 some chiefs and above and less than a dozen E-6’s and below. This meant that everywhere I went was in fact enemy territory and that a simple trip to the scuttlebutt or the bathroom would be an adventure with some chief trying to take your book away from you.

Most of the hazing and harassment was both annoying and fun. We had to perform silly song’s and skits before the chiefs. Our group of selectees dressed up as Mutant Ninja Turtle Chiefs and sang our version of the theme song for the talent show. One of the tasks we had to perform was to create a pet rock to present. I took a rock and tried the best I could to make it resemble our Command Master Chief. It had glasses I made out of a hangar and the top of a shirt with miniature anchor collar devices on it. I made cracks about how my pet rock was just as smart as the CMC it represented, if not smarter. The CMC though did like my pet rock and maintained it in his office long after I had become a Chief. They also made us do a car wash and of course had all of the base’s fire engines come in one at a time to get cleaned. Stuff such as this went on in the two months before the day we would finally put on our khakis.

Starting the night before this date was when the hazing would intensify. The ritual of Chief’s initiation started with the burial of the hat.

That’s me with the sign around my neck "I am a special case" with the coffin for my hat on my head.

This symbolizes leaving the previous non-Chief life behind as we buried our "dixie cup" sailor’s hat. We had to eulogize our hats and I put together one that had everybody laughing. We were than led to the outside of the Chief’s club where in ranks we were pelted with the majority of organic substances known to man were adhered to myself and my clothing while being grilled on stuff that we were to have previously memorized.

After an hour of so of this we were led back to try to get a couple hours sleep on the floor of a bathroom. That is if you could sleep with the noise of banging trash cans just as soon as your eyes closed. Early in the morning we were led back to the Chief’s club to a back room. This is the room we stayed in while one by one each of us were brought before the court to be judged. I spend most of the day having to suck frozen eggs and other delicacies. Mostly though like most military life it was hurry up and wait. I was one of the last ones to be called before the court where I was led out blindfolded in bare feet and hearing a crunching sound. They told me it was glass, but of course it was only potato chips. I was then put into stocks and had to suck a banana out of a condom – not the most pleasant memory. But I did everything requested as quickly as I could to get it over with. Finally enough of these humiliations met with their approval that it was over with.

After cleaning up, which took quite a while, we dressed in our khakis for the first time and had our anchors pinned on us. My sponsor was AOC(AW) Al Castro

So to all those new Chiefs who will put on their khakis tomorrow – Congratulations!

Here are the 132 selectees at the base here in Jacksonville.

"For we have seen his star in the East, and have Commie to worship him."

How to deal with the problem of too many vocations

On Owning More Books Than You Can Read

From the “I’m such a jerk” files

In honor of 65th anniversary of D-Day

I think I knew Chief Castro, but then again, there has to be more than one. But he was a brown shoe, and a stickler. This was in Great Mistakes in ’96.

You look much more like chief material than your cohorts (and even you seem to be lacking), though it could be all camera angles. As the old joke goes “What does a chief use to make sure his socks match in the morning?” “His wife!”

Or as ETC Davenport used to tells us as he patted his belly, “It takes guts to be a cheif”.

Congrats on the anniversary, Chief!

IIRC this is the first time you’ve posted pix of yourself.

Did you get to wear your brown shoes to go with those khakis? Airdales have all the luck.

Congratulations on the 15th anniversary of your humiliat… er… rise to stardom!

And… Thanks for your service to our country.

Congrats Jeff! And thanks for this peak “behind the curtain”.

Your hazing pictures look like something from our college fraternity. Only you endured that for the service of our country rather than in service of meeting large quantities of beer and coeds.

So thank you for your service!

Those were the best days of my life as HMC until I retired in `71 while with 2ndMarDiv. Chiefs have to do what others can`t do.