These are some of the new faith focused Obama merch and it looks like Catholics got singled out first, but there is suppose to be gear for other denominations coming. The kind soul that I am I thought I would give Obama a hand to get out his message to some specific groups. 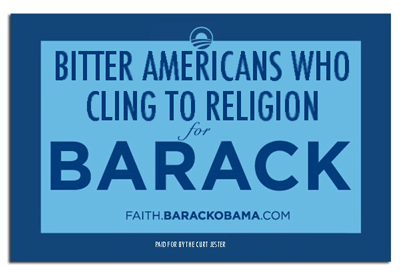 Oddly Obama has no gear of Atheists and no site called nofaith.barackobama.com for them. Plus where is Wiccans for Obama08 or Pagans for Obama08?

I have been waiting for some merchandise from the McCain website to come out and it is finally here. Sen. McCain has been long known to poke the right in the eye (he is more dangerous than a Daisy Red Ryder BB Gun). And no doubt he will continue to do it, especially if he becomes president. Pro-lifers got an eye poke when the McCain campaign recently ran an ad in support of stem-cells that made no distinction between embryonic and adult stem cells and he has yet to run one pro-life ad. McCain supports the evil of ESCR in the form of using the lives of human embryos created from IVF for research and he does not support creating embryos for research. But an ad such as this makes this murky and that the intrinsic evil he supports might be broader than what his campaign site says. So the McCain Poke Guard will really come in handy and I am ordering a set and I hope the lenses are very strong.

So, the pro-aborts are basically a group of...

Someone tried to mail cocaine to the Vatican

Excellent! Would you mind if I include the “Cafeteria Catholics” one on my blog with a link back here? Too good not to spread! 🙂

I suppose it goes without saying?

I think some “Muslims for Obama” merch would be appropriate.

Well, P.T.Barnum said it best ” A sucker is born every minute”. If one cant see through the sorry attempt these campagins are making, one is truly blind.

Great, I love it…

What a joke the Kmeic, Sebelius, Kennedy, Biden, Kerry team are!!!

Ha ha ha! Albigensian for Obama — my favorite! I would buy that t-shirt… I just wouldn’t wear it.

Deacon Greg Kandra links on his site an article that Douglas Kmeic wrote after being denied Communion by his priest. Spare me the sob story.

As a devout Pastafarian I hope to able to proclaim my support for Obama too!

Well ok I can’t vote in this but stil…

The first one is perfect, Jeff. It fits right in with Planned Parenthood’s new “I Believe” signs, color and all.

In Providence, RI, our local 40 Days For Life campaign will take place this fall with a backdrop of:

I BELIEVE IN A WOMAN’S RIGHT TO CHOOSE NOT TO FEEL ALONE.

I BELIEVE HEALTH CARE IS A HUMAN RIGHT.

I BELIEVE THAT FEAR SHOULDN’T STOP ANYONE FROM FEELING BETTER.

I BELIEVE MY REPRODUCTION DOESN’T NEED YOUR PERMISSION.

Ugh. As I said, your invented Obama signs fit right in with PP.
Anyone else out there seeing these signs at their local abortion facility?