A woman has been ordained as a priest in a secret ceremony in central Europe as an act of defiance against the Roman Catholic Church.

The woman who was "ordained" does not want to be identified

Three years ago, the Vatican moved decisively against an international movement for the ordination of women when it excommunicated the so-called Danube Seven.

Seven women had claimed the status of priests after a form of ordination ceremony held on a boat moored on the river Danube.

Now a similar ceremony has taken place in a private chapel in central Europe.

BBC Radio 4’s Crossing Continents Crossing Europe witnessed the event but only on condition the programme does not reveal the exact location or the identity of the young woman.

The unofficial ordination comes just two months after the inauguration of Pope Benedict XVI who is known for his traditional views.

In the case of the Danube Seven, it was Cardinal Joseph Ratzinger – now Pope Benedict – who declared that since the women gave no indication of repentance "for the most serious offence they have committed, they have incurred excommunication". [Source]

I wonder why she doesn’t want to be identified? Is it to keep from being formally excommunicated? If that is the reason it is rather ironic to not accept the authority of the Church that it can not ordain women and at the same time accept it’s authority that you can be excommunicated. 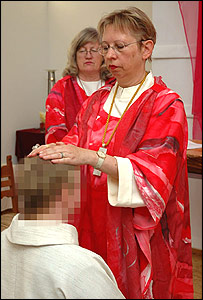 How about a caption contest for this one? I will get it started with.

More of the same?

Come off the Cross

Around the world with Planned Parenthood

Black Knight of the Soul

“Stop stewing Helga,… after I make this one disappear we’re off to the US to catch ‘The Vagina Monologues’ at one of their catholic colleges.”

The True Church has been in the desert of marginalization and ridicule for many years now. Don’t look to the buildings and robes that once “housed” the True Faith. This is a time (and has been since the 60’s) of great apostasy, as was foretold in Sacred Scripture and in reliable private revelations throughout the centuries. I am 54, and a convert of 19 years. You will find that Catholic Church that you seem to long for among those labeled “traditional” Catholics, and even in that general realm, you must step wisely. Sometimes we take the sword of Catholic Truth to our enemies… at other times, when they “revel in the sun”, we give them the “moon”…so to speak. Don’t let the battle deter you Lucy… come home!

“I sense that you are angry that the all male dominated Roman Catholic Church has denied you the right to become a priestess, according to the order of Mother Joan Chisstler. You must assume that you are like her, a goddess, who leads her people to full salvation through the subsciption to the National Catholic Reporter and through the full participation of the Holy Menstration Cycle of Women Church where our fellow sisters gather to express their feminine encantations. Let this red robe remind you that you are enpowered to be like her: bitter, angry and a prophetic voice crying out in the wilderness: prepare ye the way for Mother Joan Chisstler for yet she comes to set the male dominated Church free from its bondage of sexism, from its beleif in One God and its insistance on following the teachings of the all male dominated Roman Catholic Church.

May the goddess Mother Joan Chisstler be with you all.”

Don’t know if the last post by “DJP” was intended for you or not…? But, this at least gives you a sense of what authentic Catholics have to waste their time on these days. And why we sometimes resort to humor, since no other response is called for, or possible.

I think somebody’s off their medication…

Ok let’s get something straight here. I am a craddle Catholic and darn proud of it. I went to parochial schools most of my life. I was taught by the Sisters of Mercy, and the Marist Brothers. I married a none Catholic and through prayer, and in giving my husband to the Lord,( and in his time,) he became a Catholic 5 years ago. We go to a very conservitive Roman Catholic Church. My son was an alter boy until he went into the Navy, (no alter girls). We all cheered when they elected Pope Benedict XVI. I don’t believe in cafeteria Catholicism, and I hope our New Pope knuckles down on liberals, and the like. I would die for my faith, and may someday have to.

But this is a humorous contest here. Remember??? I put humor into my posts. If someone has taken offense with them, well go pound sand in your…..navel.

May God Bless your theology, ecclesiology and spelling.

I posted this as a response to the request for humor, not as response to any other postings.

It’s odd though. You would think that those who really want women in the priesthood would at least try to immitate the Rite. I mean they really do look ridiculous.

BarJones, no you didn’t. I just felt by my goofing around I had painted the wrong picture of who I am, and I found it nesessary to lay it all out there. You didn’t step in a cowpie, you just found yourself checking your shoe is all.. Blessings.

From this day forward, call yourself “Darth Betty”!

“Ok, so for the whole ‘bread-to-Jesus’ thing, you’re saying DON’T use the word ‘abracadabra’?”
“Only if it makes you feel spiritually uplifted to do so.”

You are taking this beyond the realm of satire, which is all it was ever meant to be. I don’t even see the comparison to “a giggle at Gethsemene?” (how utterly cruel) And I really don’t see the need to study Chesterton to find the proper aplication of humor. You just don’t have any, nor did Chesterton. This was humor, and you have turned it into an ugly attack. I’m at a loss as to what else to say to you…

With looks like theirs, they’re destined to be celibate anyway, at least we should thank BBC by being charitable to us by blurring the pic.

Bob, that was an excellent burn! Made my day!

Great, here is where the real subversion is……

If this is true, does she really think no one will see this picture, or find out who she is? Maybe someone should pass this little treasure along to someone in the UK. I’m sure she’ll be known faster than you can say, ” I got canned from being a religious education teacher”.

“giggle in gethsemene” is a use of hyperbole to make a point… nothing cruel intended, but something fitting applied. I don’t see the crisis of the last 40+ years in the Church as a wine and cheese affair, where witicisms are exchanged like pennies for applause… a thinly veiled cynicism.

“But shun profane and vain babblings: for they grow much towards ungodliness” – St. Paul

“Faithful are the wounds of a friend, but the kisses of an enemy are deceitful”. – Proverbs

Knowing our own weakness, we should pray for one another. A “pound of flesh” will not suffice for the journey.

Pray for you? Yes I will and for your happiness. I can’t play with hyperbolic statements. I don’t see the humor in them as you do I guess.

“We geniuses pulled a fast one on Benny, eh? So what do you think of my hair? Yours is hideous.”

Personally, I am of the opinion given by Aristotle:

After the Litany of Heretics, The high priestess evokes the Amazon Goddesses to liberate these “chosen” women from the power of male domination.

Do you wnat this woman to be your child’s DFD?

On this segment of “Where are They Now?” we catch up with Martina Navratilova.

“You must be THIS TALL to ride the Apostasy Roundup!”

“I think a butterfly stitch should close that gash.”

“I’m reading… yes, you will have good fortune some day!”

I baptize you in the name of the Mother and the Daughter and the Holy Spirit. OK?

“A distortion of Church teaching.”

I’m sorry if I offended anyone for my comment up there on their physical properties. But on a closer look:
http://hosted.ap.org/dynamic/files/photos/L/LYO10207021724.html?SITE=1010WINS&SECTION=INTERNATIONAL&TEMPLATE=DEFAULT

THEY ORDAINED A MAN!

Not that you’re going to come back and read this, but I really have to say something.

As ecstatic as it would make me if you came back to the One True Church, your heart is not in it. You would find too much that hurt your “feelings” and “upset” you. Protestantism is a pretty good cure for that. No regulations, no time-tested values, and no tradition! None of that extra, inconvenient stuff.

And I am so proud of the people that have posted messages here. Catholics have probably the best sense of humor on the planet. Look what we’ve had to put up with all these years! Plus, who can be all melancholy and morose when you have the Real Presence?? I mean, the Holy Family knew how to party. Look at the Wedding at Cana!

Mary: Jesus, they’re out of wine.

Mary: Hey you guys over there!

Jesus: Mom, no, mom, wait… ::defeated sigh:: Alright boys, this is how we’re going to do it. Do you have jugs of water?

Jesus: Alright, we’re done! Back to the feasting!

Drunkard in the corner: DUDE, THIS STUFF ROCKS!!

So, Julia, if you’d rather go to where it’s NOT at, miss out on the whole “wonder and awe” thing, and do only what you like and not take part in the infinitely wonderful plan God has for you, then go ahead. I’m sure the demon on your shoulder is laughing hysterically right now.

As for me? I’m sad for you. Really truly. Because I’d hate for you to miss this. You’ve missed so much already.

And now for my caption!

“By the power I’ve vested in me, I declare you Bobo of the Testicularly Challenged! Sue, get me another one of those nifty tarp things.”