May Eternal Rest Grant Her

Sister Lucia Marto, the last of three children who claimed to have seen the Virgin Mary in a series of 1917 apparitions, has died, Portuguese media reported today. She was 97.

Sister Lucia, a Roman Catholic nun, had been ill for the past three months and died at the Convent of Carmelitas in Coimbra, north of Lisbon, TSF radio reported, citing family sources.

Lucia and two of her cousins, siblings Jacinta and Francisco, said in 1907 that the Virgin Mary had been appearing to them once a month and predicting events, such as a world war, the fall of Russian communism, and the eventual persecution of Catholics and the Pope. The appearances took place on the 13th day of each month in Fatima, a town about 70 miles north of Lisbon.

The first sighting was May 13, and the appearances took place for another five months, ending abruptly in October that year.

Shortly after, both Jacinta and Francisco died of respiratory diseases. But Lucia became a nun and penned two memoirs while living in convents.

The Catholic Church later built a shrine in Fatima, which is visited each year by millions of people from around the world. More than 100,000 people from dozens of countries routinely attend the annual commemorations of the sightings.

Pope John Paul II has visited three times since becoming pontiff, spending a few minutes with Lucia during a 1991 trip to the site. He has claimed the Virgin of Fatima saved his life after he was shot by a Turkish gunman in St Peter’s square in 1981. The May 13, 1981, attack coincided with the feast day of Our Lady of Fatima, and John Paul credit’s the Virgin’s intercession for his survival.

In 2000, he visited Fatima to beatify Jacinta and Francisco.[Source] 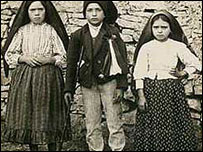 The cousins were tending sheep
when they saw the visions

Looking in a mirror for advice

A sequel to Maria Monk?

Save the, oh nevermind

The point I think was that the 13th was a significant date for Sr. Lucia, and her passing on a 13th was not coincidental.

I am more concerned about what sort of conspiracy theories and warnings this is going to generate among some of the fringe apparitions groups out there. Things were bad enough when I got tangled up in them 2 years ago.

The visions were the 13th… She died on the 13th… Coincidence? I think not.

From AP: LISBON, Portugal (AP) – Sister Lucia Marto, the last of three children who claimed to have seen the Virgin Mary in a series of 1917 apparitions, has died, Portuguese media reported Sunday. She was 97. Sister Lucia, a…

If it’s not a coincidence, then why did she die in February when the visions were in May?

You know, I have always thought it best to discourage in myself any very acute interest in apparitions. It’s so easy to become fascinated by them to the point at which the ordinary life of the Church seems humdrum. I remind myself that spinning suns and roses in January (I leave to one side bathetic excesses like seeing the face of Our Lord in a tortilla) are really nothing compared to the daily miracle of the Consecration.

Hey! Isn’t that Stalin’s image in the shadow on Sr. Lucia’s cloak in the picture? I wonder what that means . . .

HEY! it does look like a partial profile. LOL!!

For some reason my trackbacks to you don’t seem to take so, ping!

I also note that Michelle has linked to you as well.