What's wrong with this picture

As a child I remember reading the Highlights magazine while waiting in the doctors office. They always had a page where you had to find the hidden pictures. These were items hidden that did not belong with the rest of the picture.

These two pictures also have something in them that doesn’t belong. 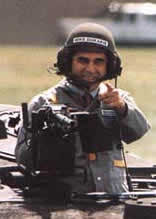 Now I could take the cheap shot that I am glad that we sent the troops a turkey, but in the aftermath of turkey indulgence I am kindly disposed not to insult these tasty creatures.

When President George W. Bush landed on the carrier wearing a flight suit, reporters were outraged that the public didn’t make the Dukakis tank connection. They wrongly assumed that Michael Dukakis’ error was looking silly. Serving in the Navy from Carter to Clinton’s second term the overwhelming message myself and those around me got from the Democratic parties leadership was embarrassment. They kind of knew they needed us but didn’t want to do anything to support us. Sitting out in the Indian Ocean for months on end on the carrier U.S.S. Midway (CV-41) in response to Iran’s taking of the hostages I got my first dose of this reality. We had been on our way to Australia when the hostages were taken and ended up spending 93 days at sea. President Carter’s address was shown on the ship’s TV system. I remember sitting in the lounge with others as President Carter referred to our ship not by name but as “the other carrier.” Three months at sea and we were just the other carrier. After the initial anger had died down we resorted then to humor. Our ship’s T-shirts that year proudly said U.S.S. Midway “The Other Carrier.”

Under President Reagan I watched a Navy that had been demoralized, under-supported, and rife with drug problems change drastically. I am not really that concerned if presidents themselves were once in the military. Jimmy Carter was a Navy Veteran and Ronald Reagan made training films for the Air Force during WWII. Under Reagan we saw that not only was the military being supported but we knew that the president gave a damn about us. During Desert Storm President George H. Bush personally wrote letters to the families of the 300 plus military personnel killed. During Clinton’s term it was back to “don’t ask, don’t tell” and no I am not talking about his policy on homosexuals in the military. Military personnel in the White House were asked not to wear their uniforms. When President Clinton visited my ship wearing a flight jacket he didn’t look silly; it was more like seeing a PETA activist wearing a fur coat.

In related news: Thank you President Bush for spending Thanksgiving with our troops.

Fabio to play the Pope in Sharknado 5

Cross, Altar Could Be Removed From Nursing Home

Indoctrination – Doing it for the children

Keeping abreast of the latest theology

I always assumed military personnel would see things this way, but it’s nice to get a honest opinion from someone who served.

I thought Bush’s move was perfect: the troops deserved something like this and it was nice to see a president be a leader, rather than simply posing as one.

It’s good to hear it from someone who was there.

I was also in the Navy from 1980 to 1988 and experienced firsthand the US military’s recovery under Reagan. Those were some fine years to be in the military. I’d probably have gone for a third hitch had I not… um… met a girl.